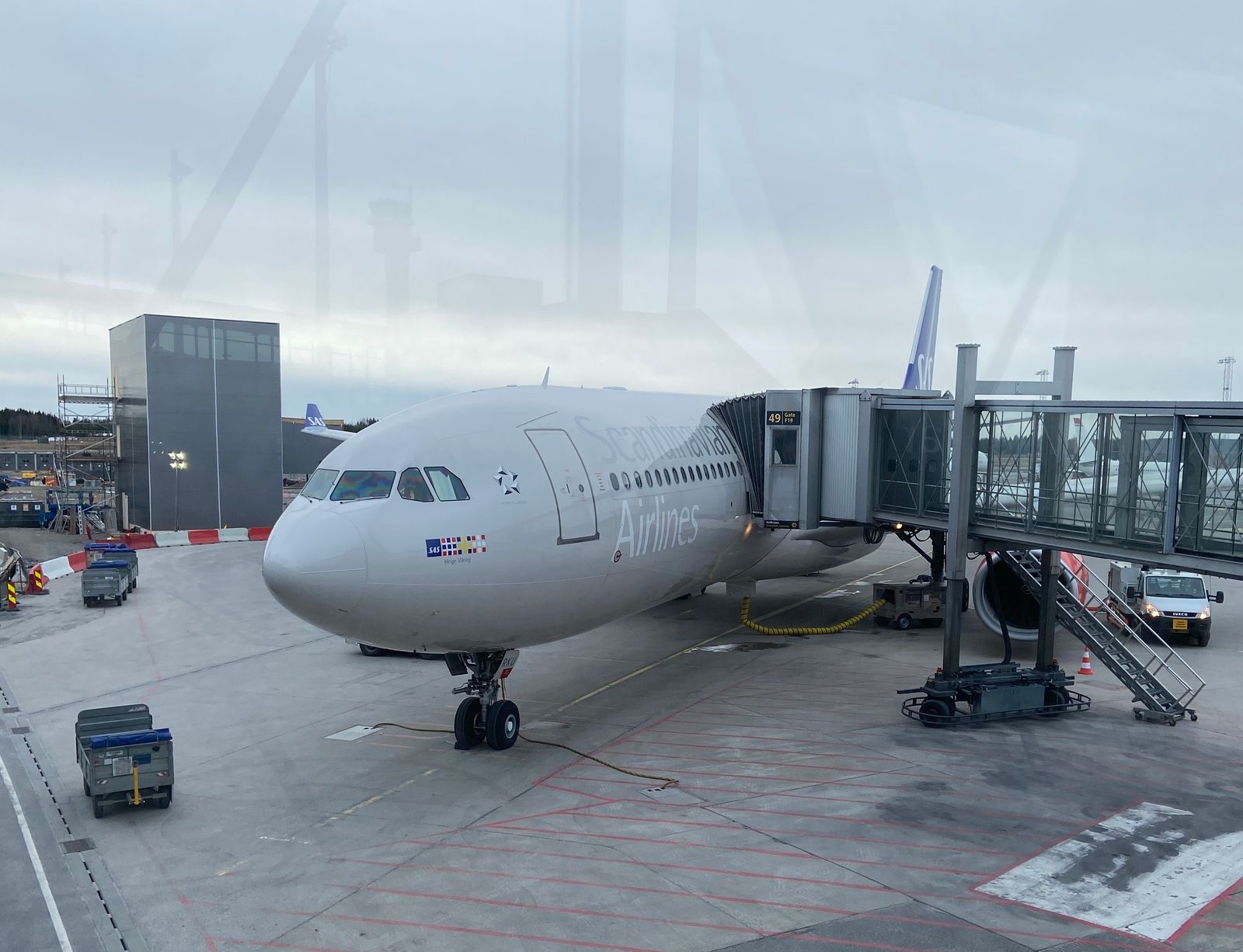 On a trip back in March I was able to upgrade from their premium economy (SAS Plus) for a relatively low cost (About 20 000 Eurobonus points). I’ve flown SAS Business a number of times before and as a result this review will be a mix of my different experiences, however with focus on the latest flight. 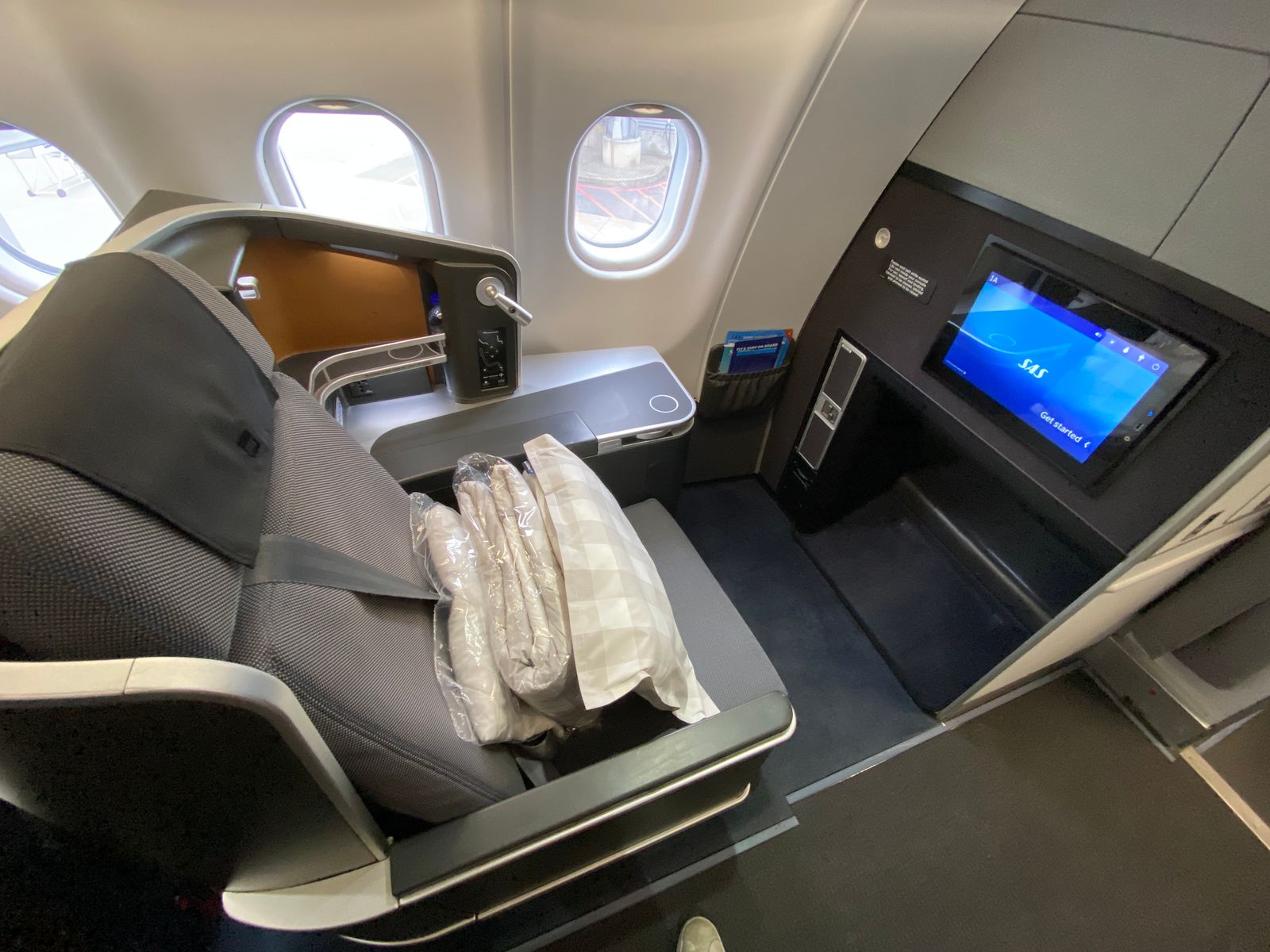 The seat is a fully lie flat business class seat with an air mattress. It comes with bedding and a pillow in case you want to sleep and can be set to any position between lying down and fully upright. Since it’s an air mattress it also comes with a massage function, however I’ve never really seen the use for this as one can barely feel it. You can also configure the firmness of the seat which is a nice touch as of course different people have different preferences, especially when it comes to beds. This means the seat can be adjusted to be perfectly comfortable, however it also comes with a big drawback - It can puncture! While I’ve never had this happen to me personally I’ve heard many stories of seats being punctured and since the air mattress is the only cushioning the seat provides, at that point you will be spending the flight on a plastic bench unless there are other seats available for you to switch to, which is hardly the experience you would want in business class. In SAS’ defense they do usually compensate these passengers when it happens and it is a fairly rare occurrence.

The seat has some neat storage options and depending on what row you choose these will be either on the aisle side or the window side. I recommend even rows as the divider is by the aisle (The seat in the picture is 01A, I was seated on 02A) which gives some additional privacy and a better view out the windows if you’re in a window seat. There’s enough space in this area to store your personal headphones (As well as the ones provided by SAS), a bottle of water as well as your phone, the amenity kit and other small items you may wish to keep close at hand.

The business class cabin on the A330 which I flew consists of one large cabin with 8 rows of seats. The cabin features two toilets in the back, one on the starboard side which is large and spacious and one on the port side which is about as small as a normal economy class toilet (However it does feature a window). I’m not particularly tall yet I struggle to stand up without hitting my head. Taller passengers will want to stick to the starboard side toilet, worth keeping in mind when picking your seat!

The amenity kit is really interesting! SAS has recently updated this and it’s clear that they’ve taken care to not only highlight Nordic brands but also make sure that their focus on sustainability shines through. The toothbrush is made from 100% sustainably grown bamboo, the face mask is made by Filippa K which is one of Sweden’s top designer brands, and the socks are made by Swedish Stockings, a clothing brand that focuses on making sustainable socks, stockings etc.

This rebranding and focus could easily had been just a gimmick and fancy marketing, however I think SAS has done a great job - The products are of excellent quality and I would say rival those distributed in many First Class cabins. The face mask is among the most comfortable I’ve tried (Tied with Lufthansa’s First Class face mask), especially compared to the older one which SAS had previously. The socks were comfortable, although my pet peeve about these types of socks is that due to the high amount of synthetic materials they feel like putting on a pair of plastic bags and after a few minutes your feet get very sweaty. This is nothing unique for SAS though but has been true for all airline socks I’ve tried.

Food and (Especially) drink selection in SAS Business is really good. However I’ve long argued that SAS has the best beer selection in the air but this has become slightly worse recently (While still being among the best). The delicious Mikkeller IPA has been replaced by a dull Mikkeller Lager and the Mikkeller/SAS sour beers have now been replaced by an organic Danish semi-dry cider. While it was good, it was not as delicious as the sour beers which used to be on offer.

I generally don’t drink spirits on airplanes and as a result I can’t give much of a review of those available on board, however the selection is big and just like with the amenity kit the focus is on Nordic brands. The spirits are exclusively of Norwegian, Danish and Swedish origin. Using these spirits the crew can mix 4 different drinks, 3 of which are variations of Gin Tonic, which I guess says something about who the target audience is for these cocktails. Finally some pre-mixed drinks from well-renowned Swedish cocktail bar Tjoget are available. These were a massive disappointment, the ones I tried were dull and uninspired and the cabin crew told me that passengers in general had not been happy with them. If I was responsible for corporate branding at Tjoget, I would be ashamed to put the company name on these drinks. 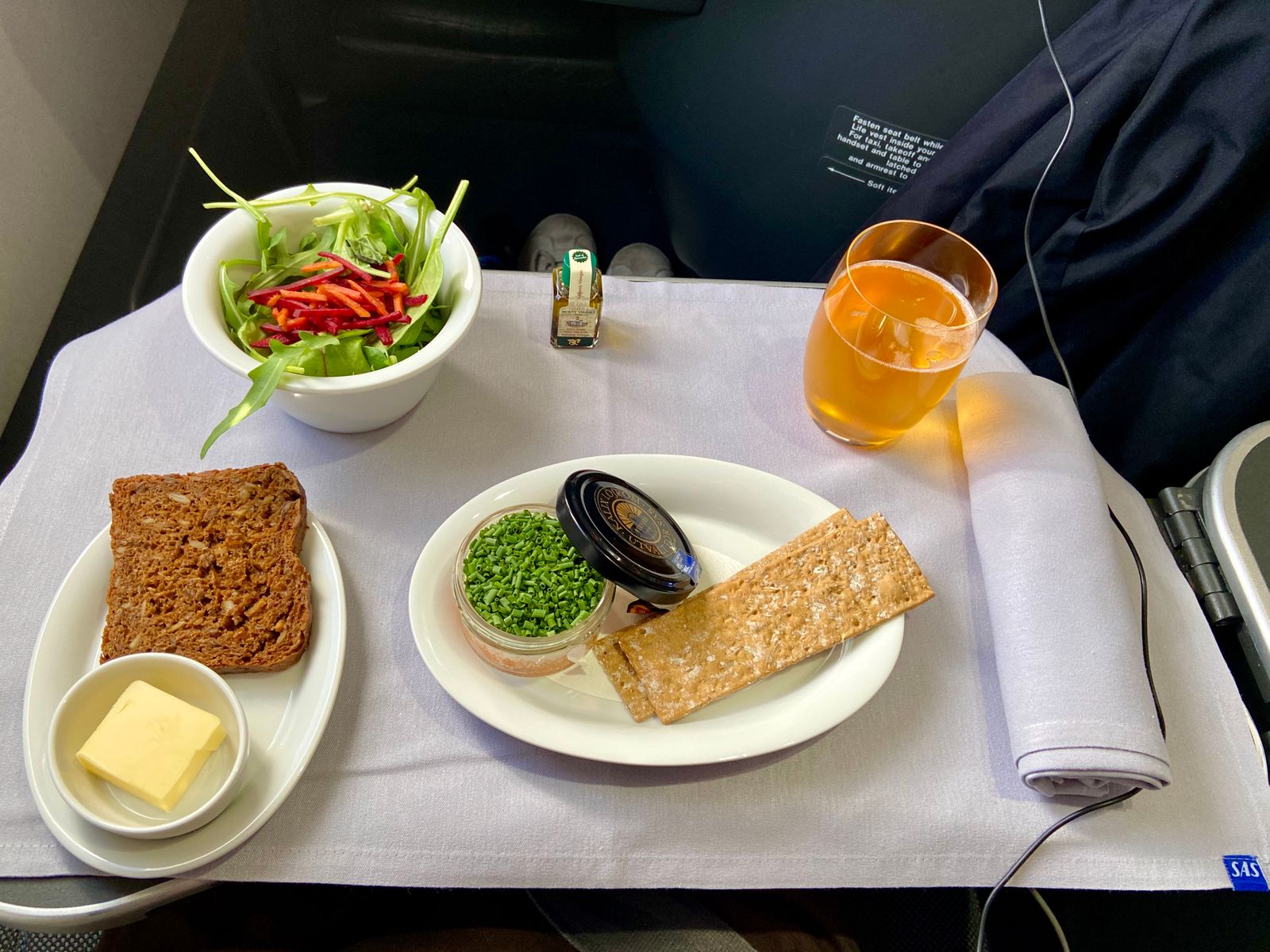 The food on the other hand has always been consistently good in SAS Business. The Kalix Löjrom is a great Swedish alternative to caviar! This was served with some Swedish hardbread and a sallad, a great starter. The alternative starter was a cold deer dish which also looked great. With this I drank the Danish cider I mentioned earlier and it made for a great pairing and an interesting option to champagne which was also available. 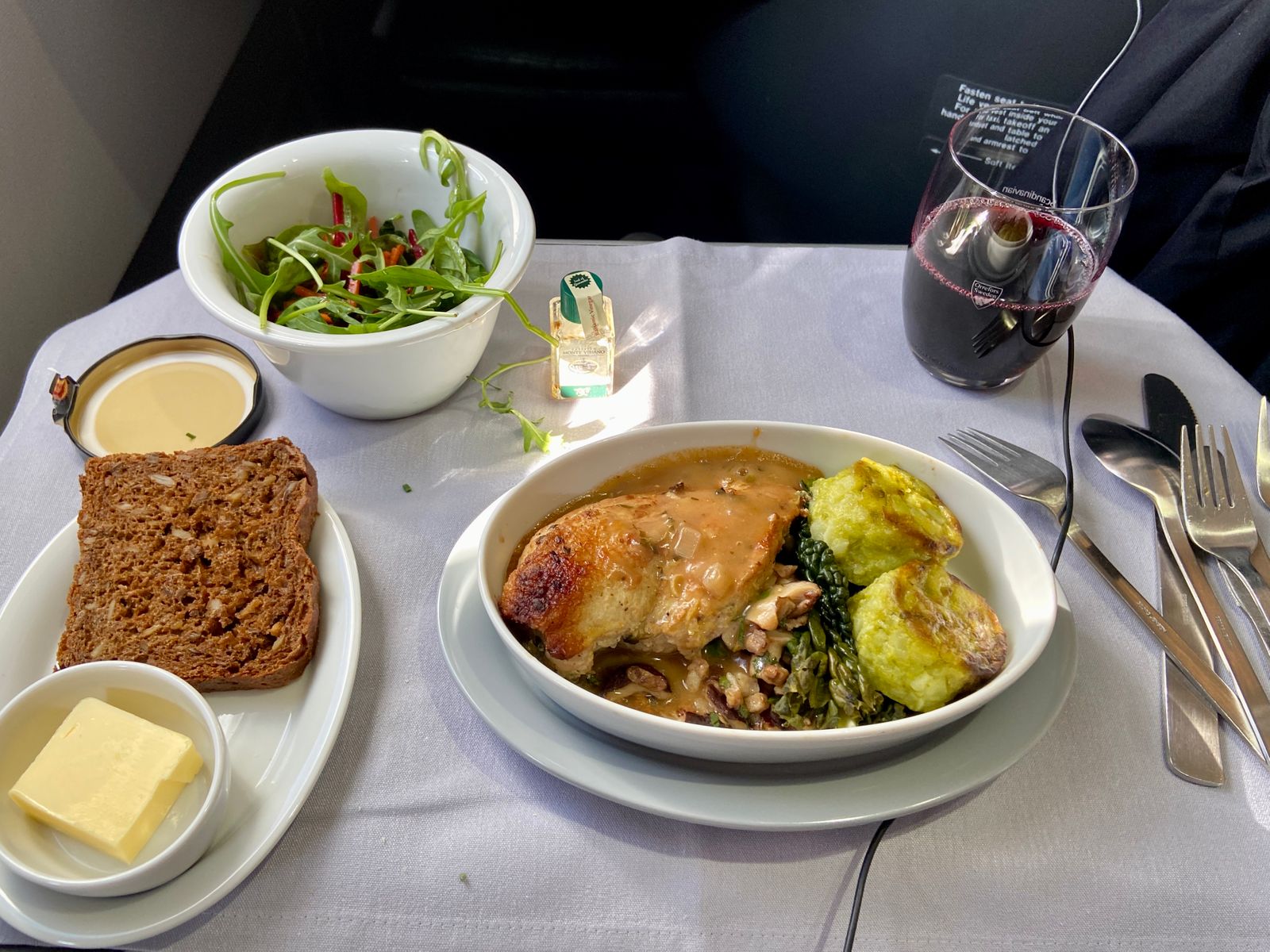 For main course I picked the chicken with chanterelle sauce and root vegetable croquettes. Also a great dish, I consider chicken to be a generally safe bet on airplanes as it’s often served with a lot of sauce meaning it’s rarely dry. However in this case it was also served with skin which was crispy with the rest of the chicken being moist and tender, very impressive! 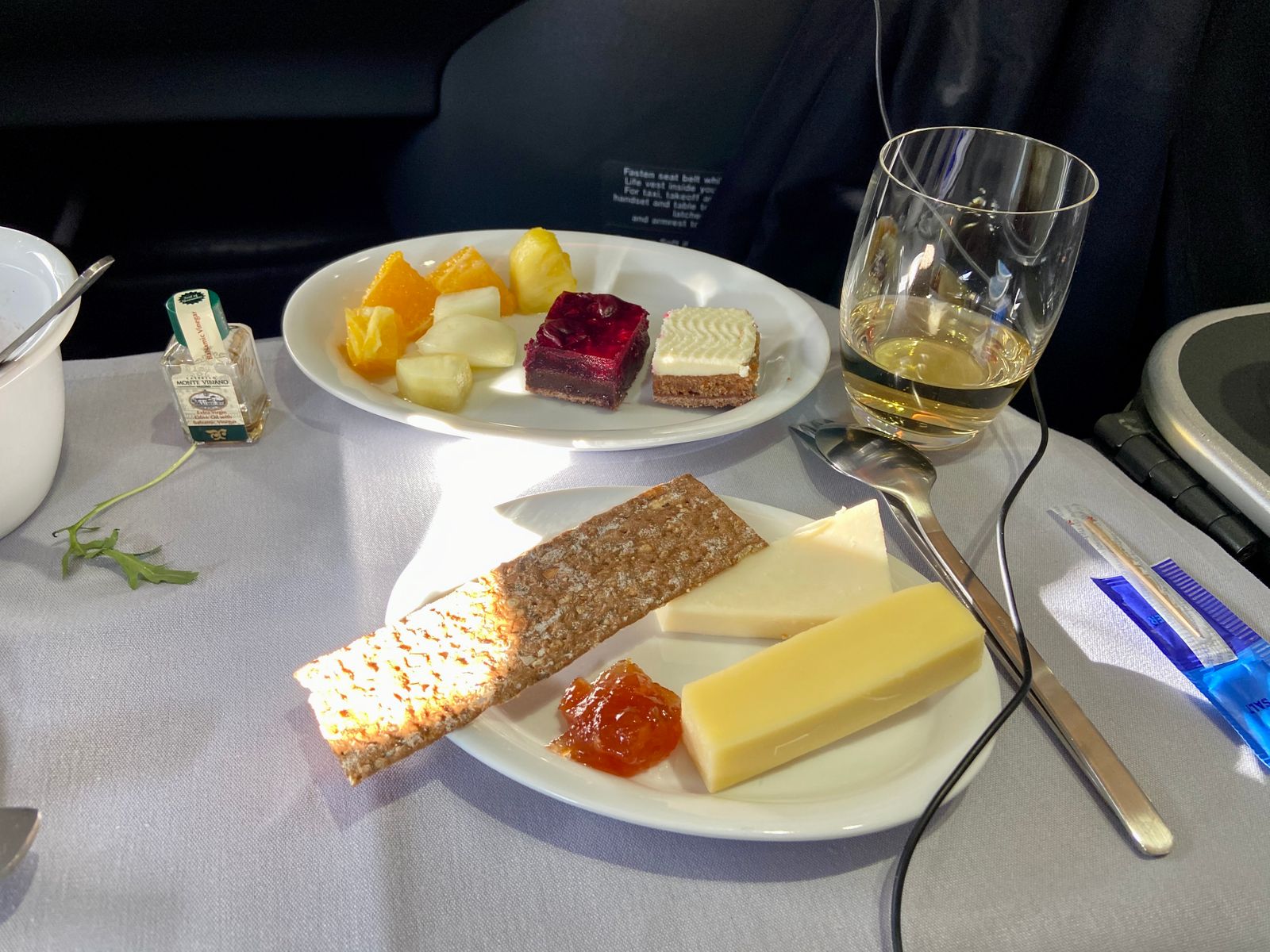 And finally for dessert was the choice of a cheese platter with a selection of Swedish and Danish cheeses or sweet pastry consisting of a cherry cake and a carrot cake… Or both. As expected both desserts were delicious as was the dessert wine it was paired with.

Just in case you’re still hungry (Or thirsty) after that, the aft galley features a snack cabinet with a selection of cookies, chocolate, coffee, sandwiches etc. More or less anything you could need. This cabinet is self-serve and is kept well stocked until about 2 hours before landing when it’s closed, around when the second service begins.

The IFE is the same as in SAS Economy and Premium Economy apart from the screen being larger as well as the fact that it comes with a remote if you do not want to touch the screen. It’s a nice and responsive UI, the selection of movies is big and featured some fairly recent big titles. I watched one movie but apart from that mostly used it to show the moving map. The only thing I would improve with the map (And I have yet to see any IFE do this) would be to allow me to see the map with data such as speed, altitude etc. overlaid instead of being forced to watch a slide show of different zoom levels and data.

With the air mattress seat fully reclined, the bedding (From Hästens - another Swedish touch) and the face mask it was very easy to get a few hours of sleep. As my flight had departed early in the morning Swedish time and would arrive early afternoon local time it was crucial for me to get one or two hours of sleep in order to be able to stay awake until the evening. I’m happy to say that went well and I was woken up by the cabin crew when the second service, consisting of a light meal, was starting.

SAS Business is the premium product I’ve flown the most over the years, it was also my first experience in business class, so I will most likely always see it with slightly rose tinted glasses. I think that it’s overall a great business class product apart from some minor details. The chair is great - probably among the best - the cabins look fresh and are always well-cleaned, the food is great, and the drink selection is hard to beat! However sometimes the service can also be a bit… Scandinavian. In this case everyone in the crew was very friendly and welcoming but both myself and others have experienced flights where the crew have been anything but, even sometimes as far as being rude. This is something SAS struggles with as a company in my opinion and is not exclusive to SAS Business so if you’re expecting special treatment due to the price of the ticket or your frequent flyer status, this is not the airline for you. That said, I want to reiterate that this specific flight was great with very friendly staff.

And finally, a great perk for flying from Norway is the beautiful wintery landscapes you get to see right after take off and the Norwegian fiords.