This was my first time flying Qatar Airways and it was probably the longest economy flight I had ever taken. The trip consisted a 6 hour flight to Doha followed by a 16 hour flight to Auckland.

The first leg of this marathon journey was a “short” 6 hour hop from Copenhagen to Doha.

On this particular journey I was only travelling with carry-on luggage. However, I headed to the check-in counter anyways to see if I could print my boarding passes. When I arrived there was a huge queue which I definitely didn’t feel like waiting in. Instead I headed over to the check-in machines, but they didn’t include Qatar Airways. So finally I just checked in on my phone and headed directly to the security control.

One of the great things about Copenhagen airport is that it’s so efficient even when traveling without status. Since I was flying in economy without any oneworld status I used the regular security control which only took a few minutes to complete. Once through I headed to passport control. I had some time before boarding so I went to the Eventyr Lounge, which is definitely my favorite Priority Pass lounge at Copenhagen airport.

About an hour before departure I started heading to the gate. Once I arrived most passengers had already boarded. It seems that Qatar Airways boards premium cabins first followed by zones starting with the back of the plane. Since I was seated near the very back I had already missed my boarding zone so I went to board directly. At this point I tried using my mobile boarding pass, which didn’t work. However, the staff helped me print all of my boarding passes instead. 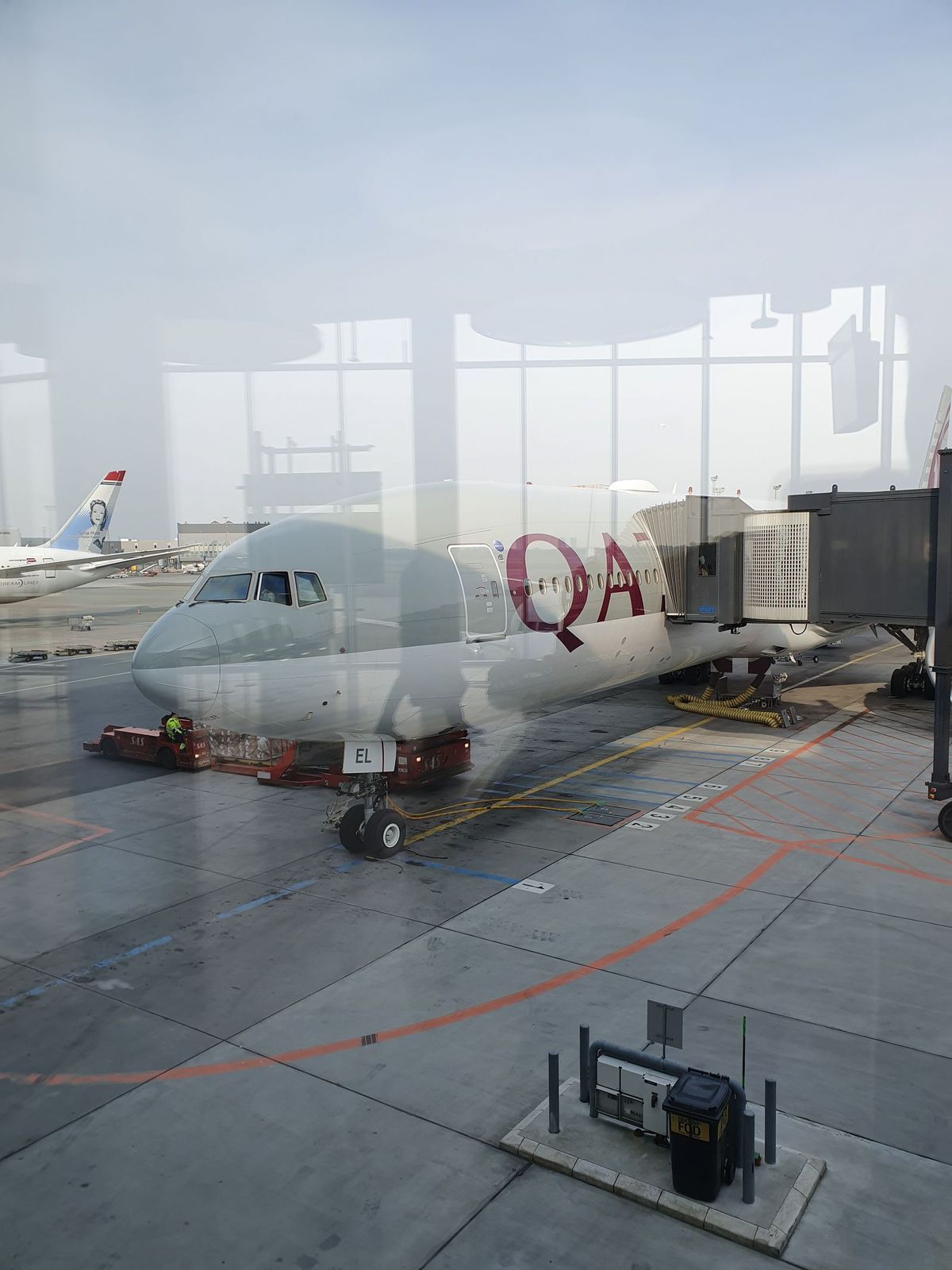 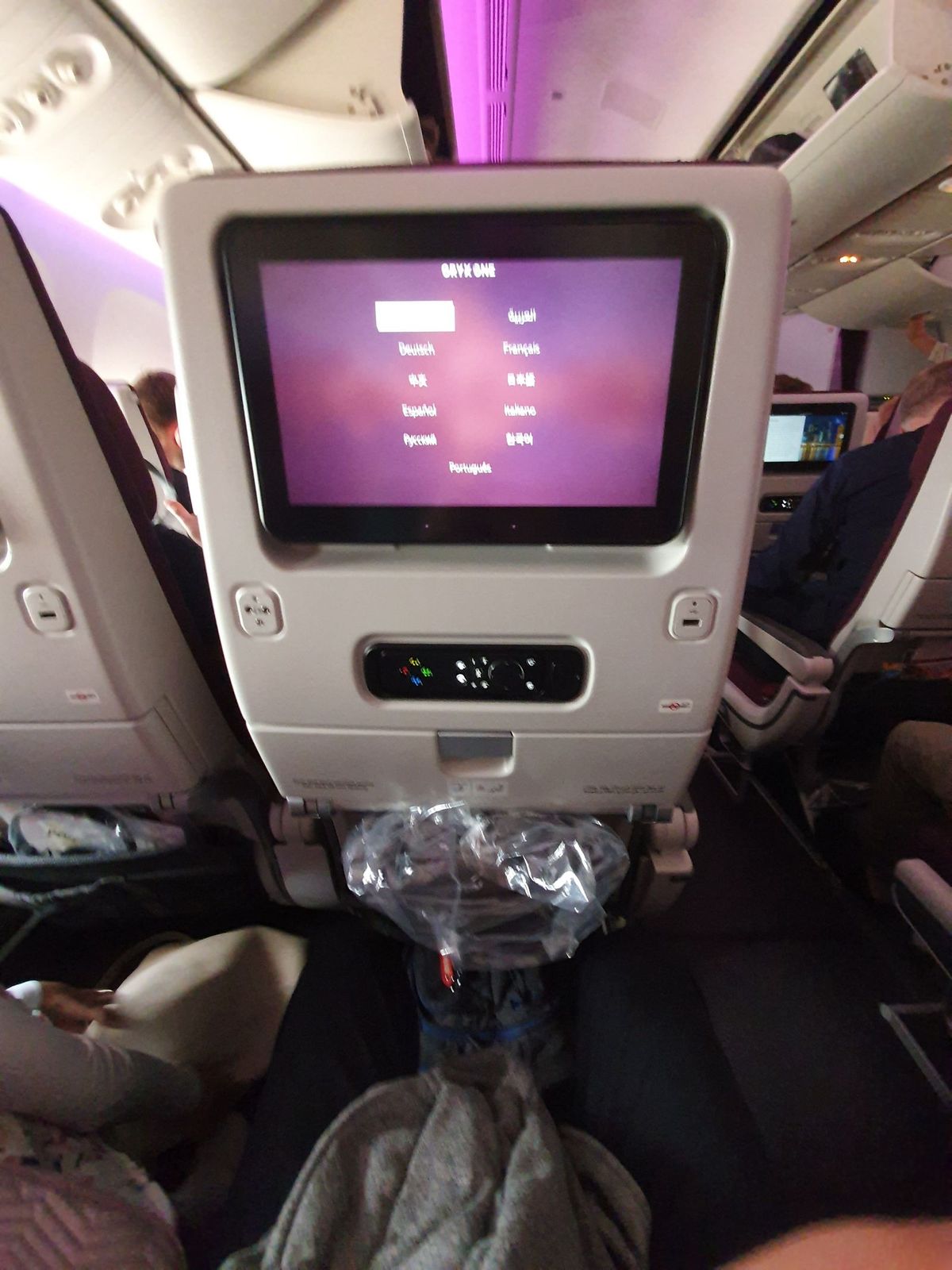 Boarding was pretty hectic. The plane was extremely hot since apparently the external AC wasn’t working, and the plane was not allowed to use its own AC until just before departure. As I arrived at my seat most of the overhead space was already full, but the crew quickly arranged some space for me.

The first leg of the journey was in a 777-300ER (Qsuite variant). The cabin felt very clean and modern. The economy section was in a 3-4-3 configuration, which makes it quite tight. However, the seats were comfortable and legroom was perfectly fine. The IFE was extremely responsive, probably the fastest I’ve ever used. I had a quick look through the movie and TV selection, which contained both hollywood and international titles. Nothing really stood out to me, but that was fine since I rarely use the IFE anyways besides for the moving map.

A great feature on this plane was the (limited) complimentary WiFi which worked well. However after about an hour or two I was told that my complimentary session had expired, so I purchased full flight “super WiFi” access for $10 USD, which seemed like a perfectly reasonable price. 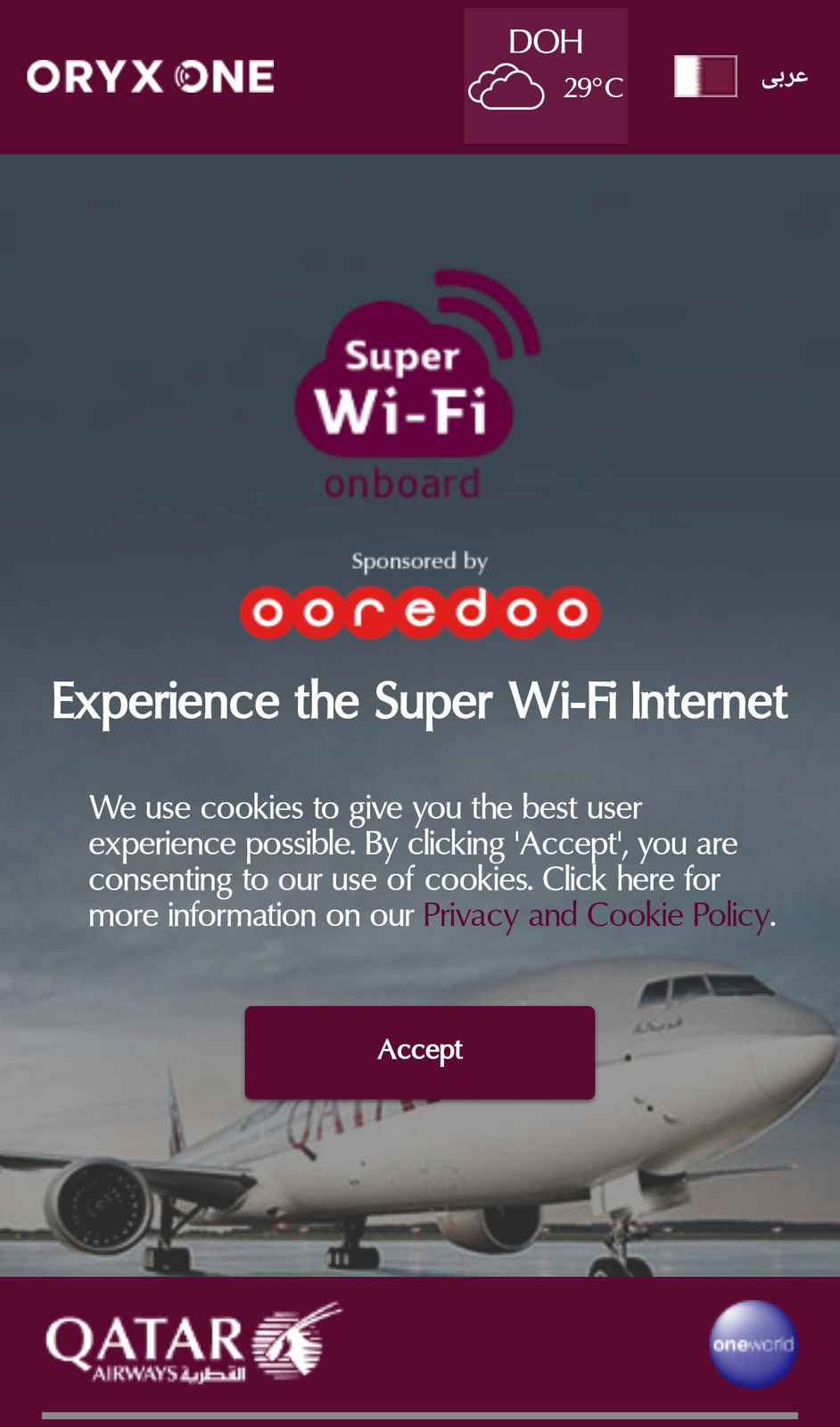 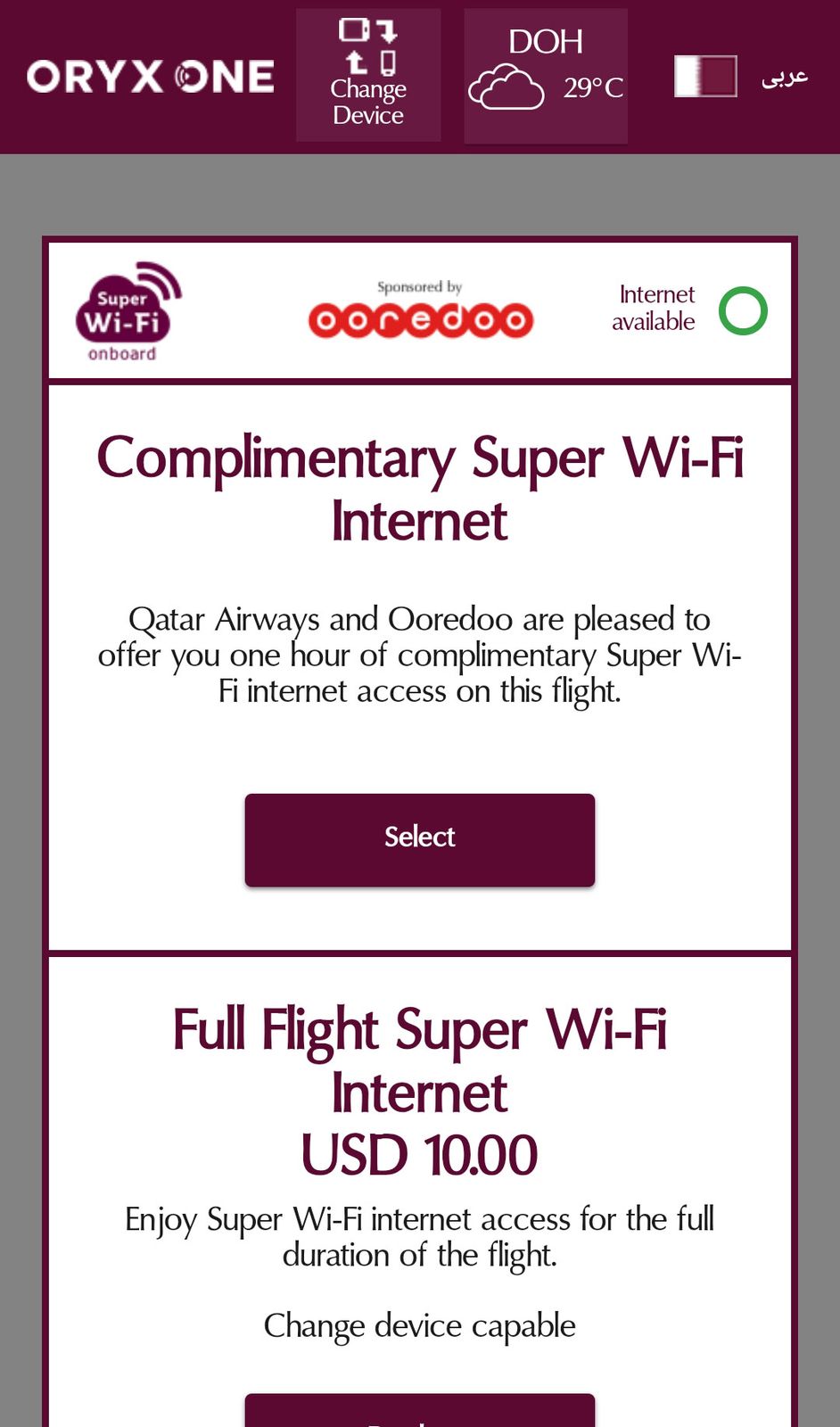 Meal service started some time into the flight which began with the crew handing out individual menu cards, a simpler version of what you’d receive in Business or First class, but a nice touch nonetheless. Three different food options were offered along with complimentary non-alcoholic and alcoholic beverages. 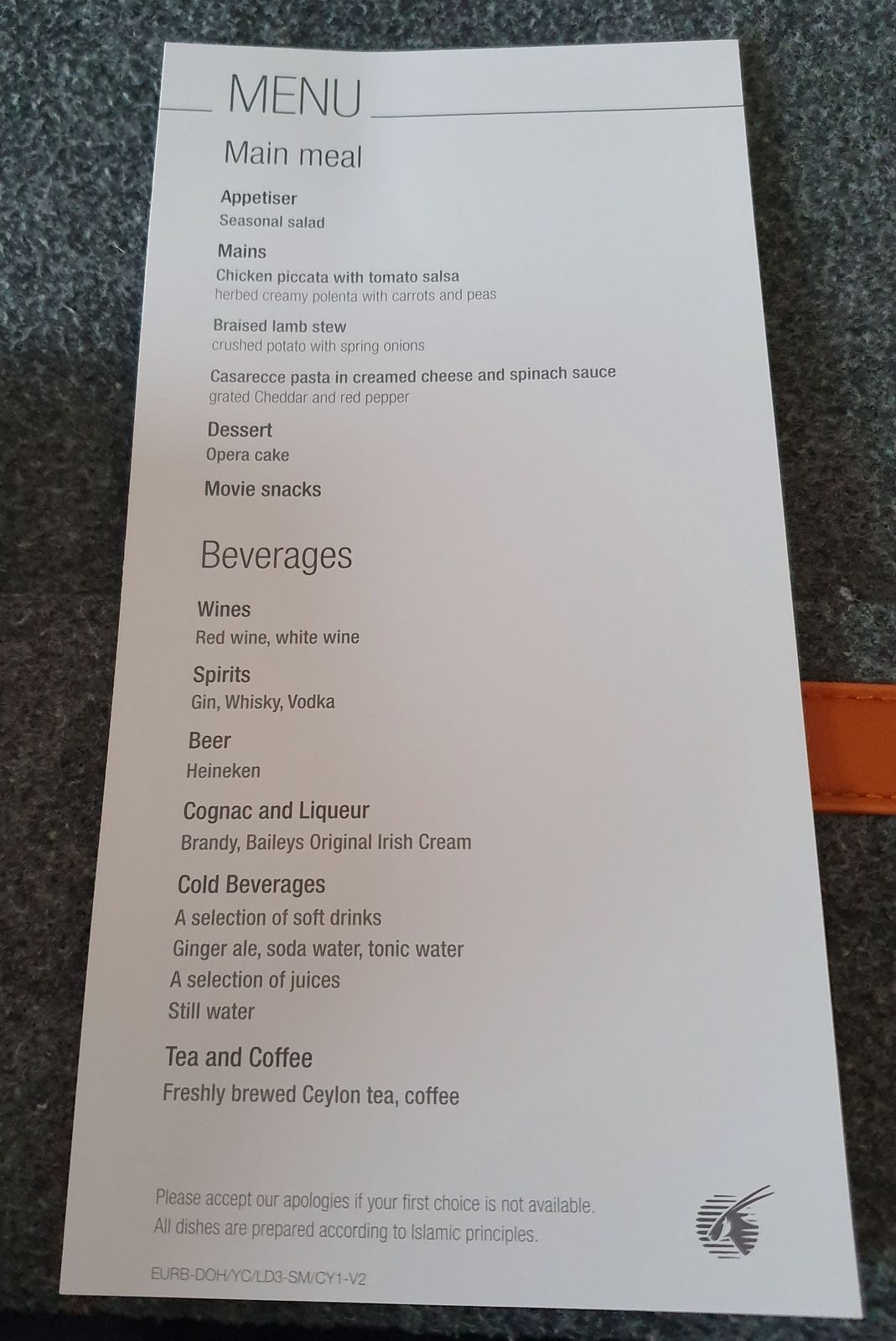 I decided to try the lamb stew. 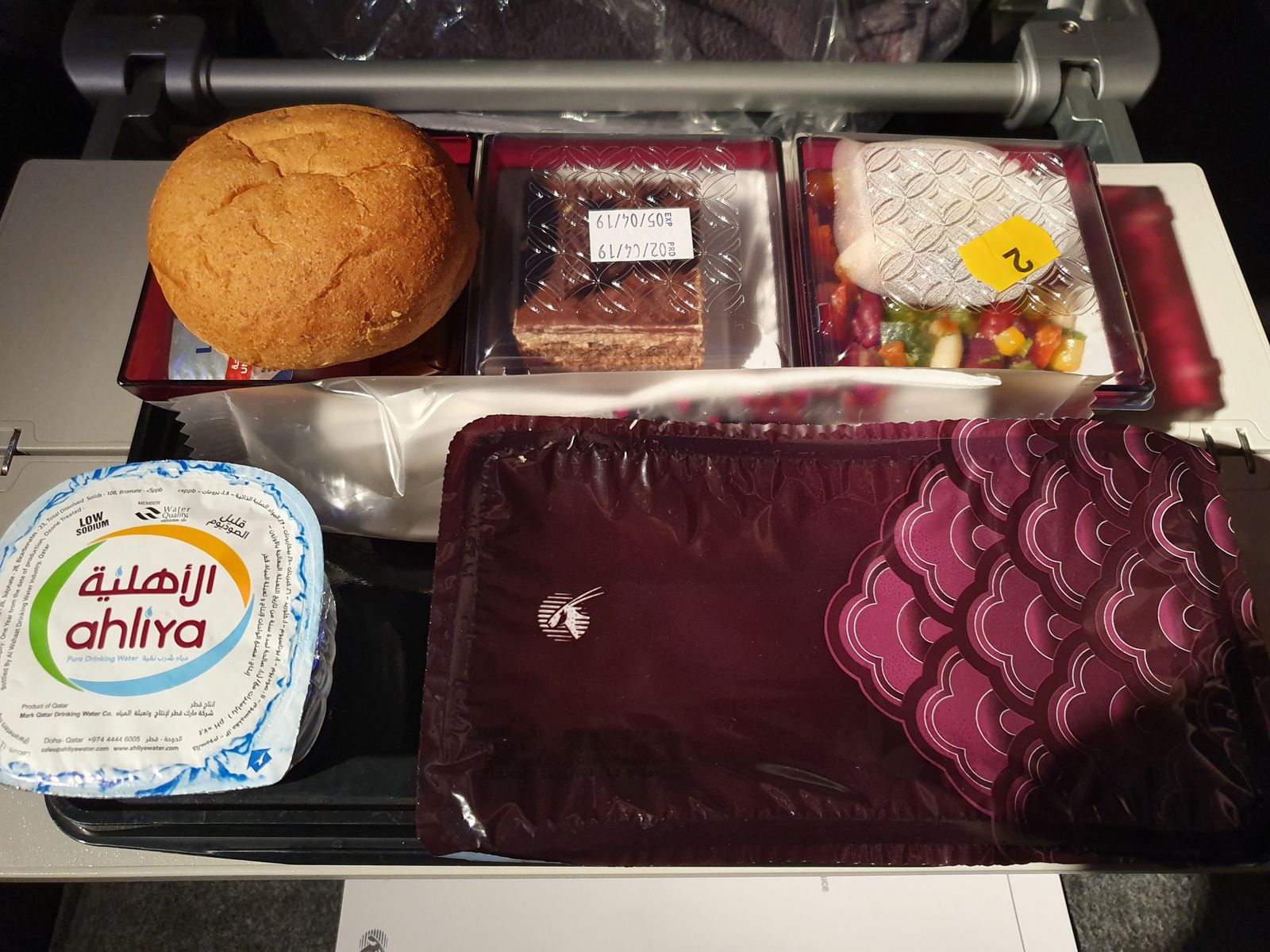 I really appreciated that the meal was served with metallic cutlery. Personally, this makes a huge difference for me and makes the meal taste better and feel more premium. 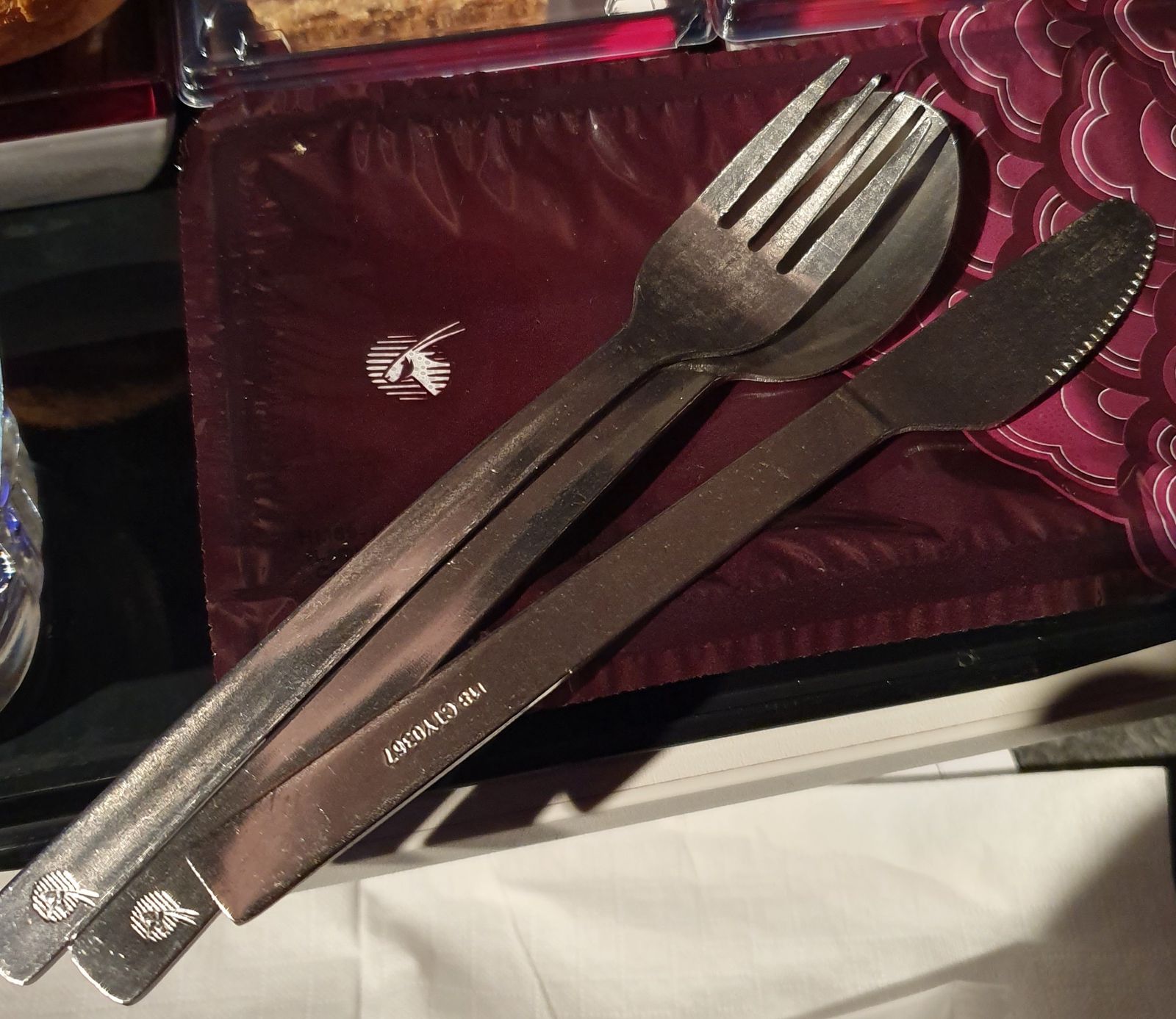 The stew was actually really delicious. 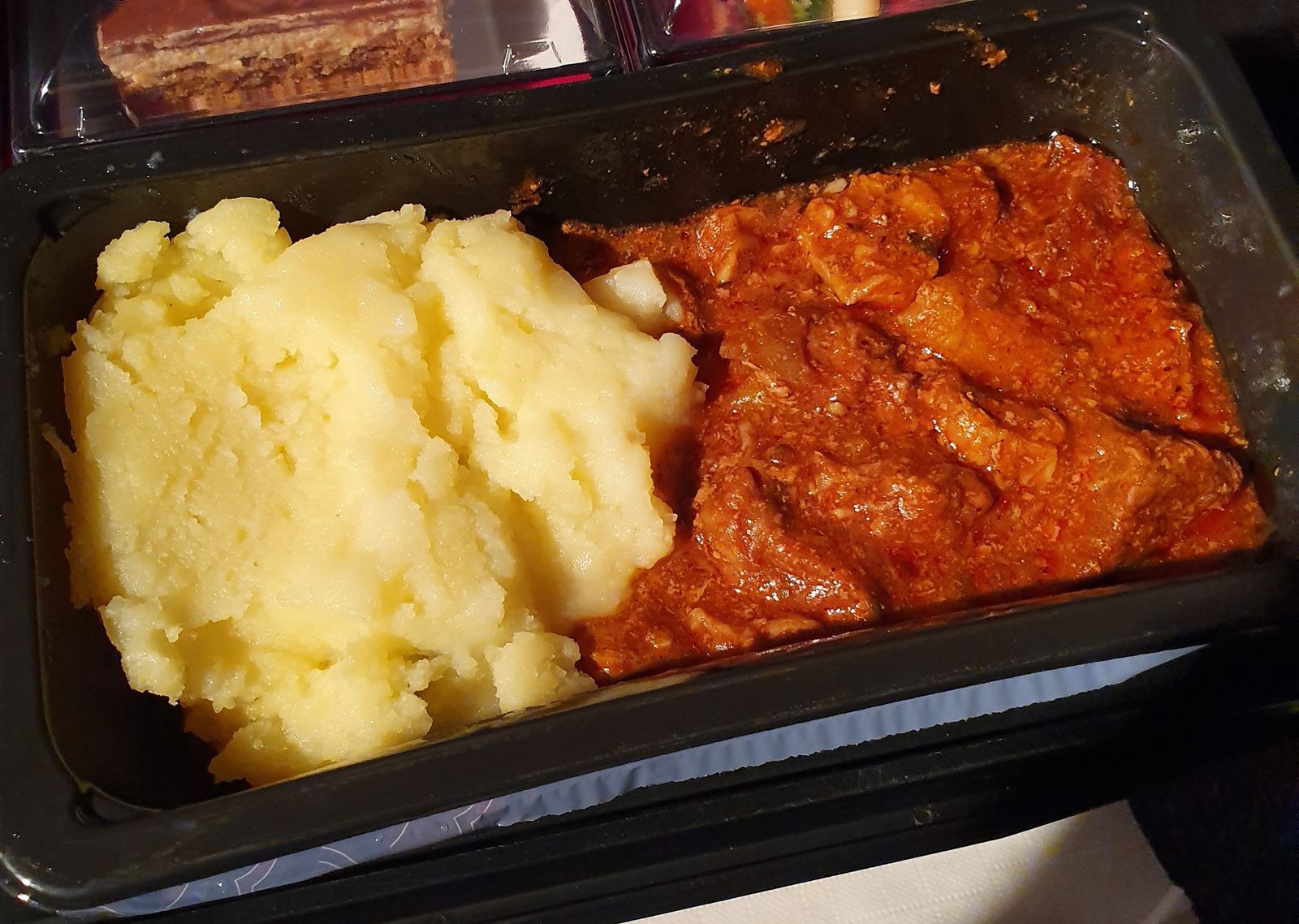 One good thing with sitting near the back of the plane is that you have easy access to the HUGE rear restroom. It’s probably the biggest economy restroom I’ve ever used and almost felt more like a first class restroom (and was even just as clean throughout the entire flight)! 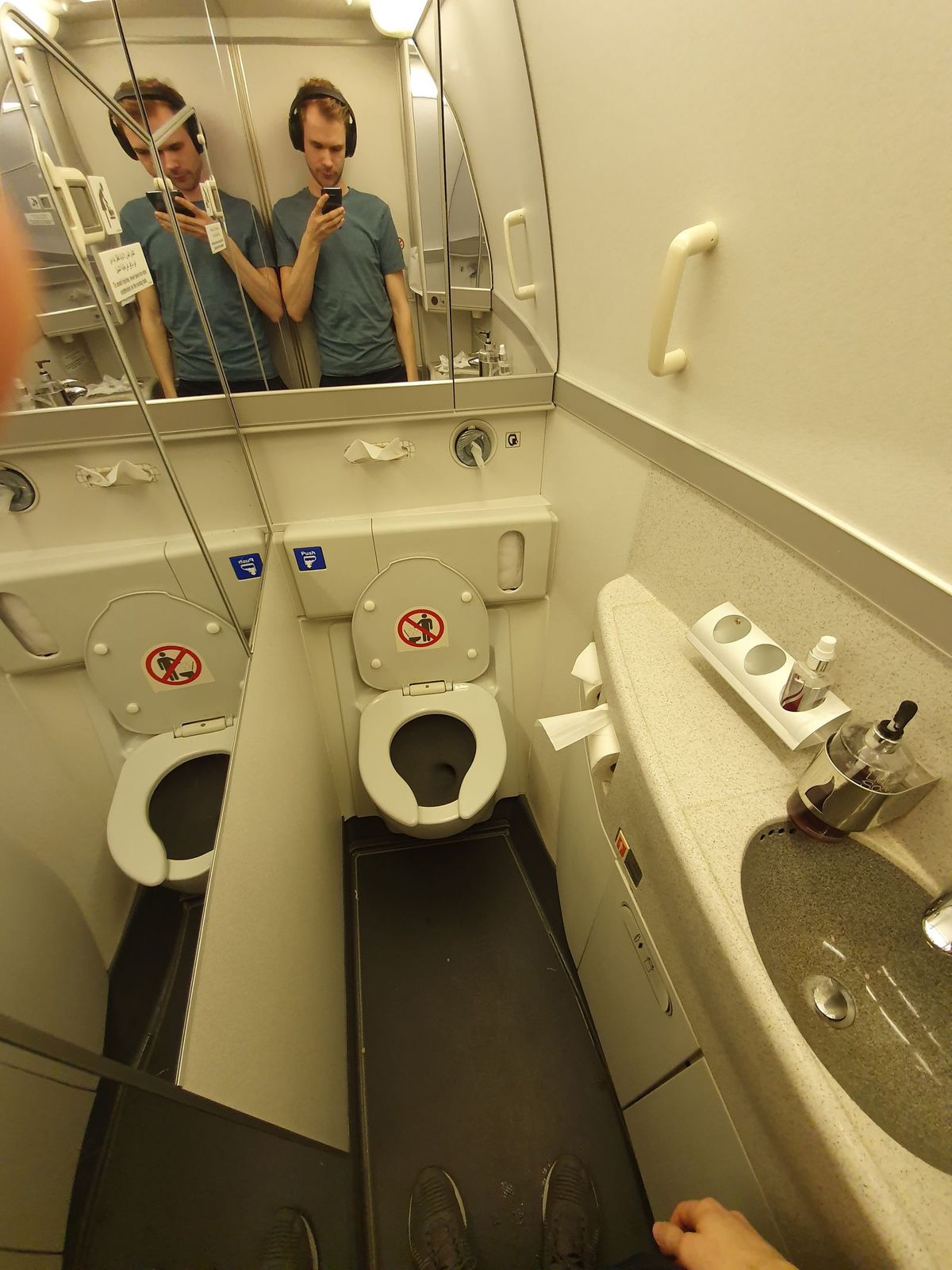 My layover in Doha was just under 2 hours. After leaving the aircraft I followed the signs to international transfers, which eventually led me to a security control. After clearing security I then proceeded towards the A/B gate area, thinking that I might have time to check out the priority pass lounge. However, by the time I had taken the train to the B gates my flight was nearly ready to board so I decided to head directly to the gate. 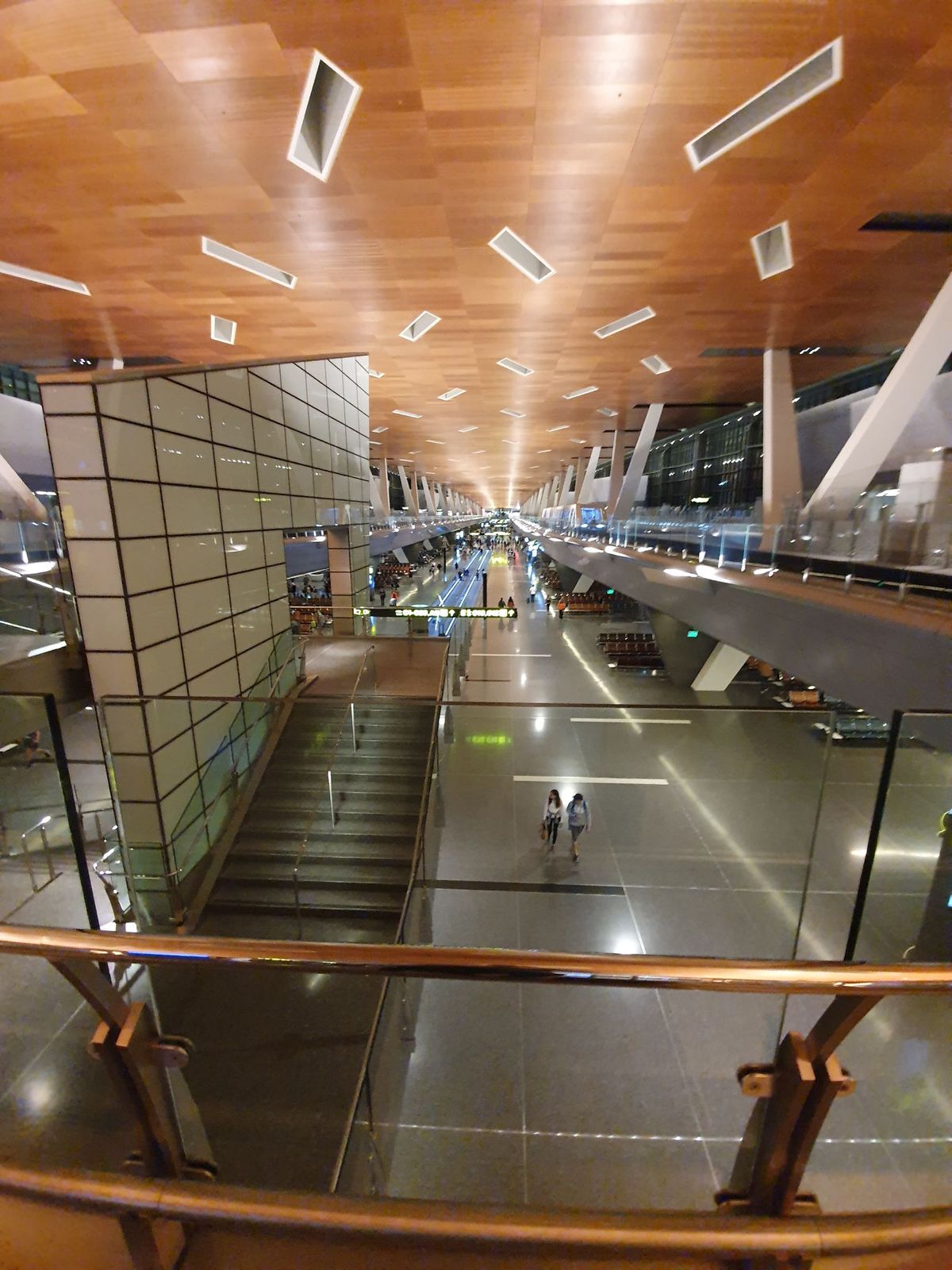 The boarding procedure for this flight was first into a waiting room followed by bus to a remote stand. Again I was seated towards the back of the plane and boarded in the first zone. This 16+ hour flight to Auckland was operated by a 777-200LH aircraft. The cabin felt much older but more spacious than the previous flight (3-3-3 configuration). The flight wasn’t full either so luckily the seat beside me was empty giving me a bit of extra personal space.

The seat also featured an older IFE system, however, there was a proper power outlet under the seat, which was definitely nice to have for this long flight. Unfortunately there was no WiFi. The crew did apologize about this. 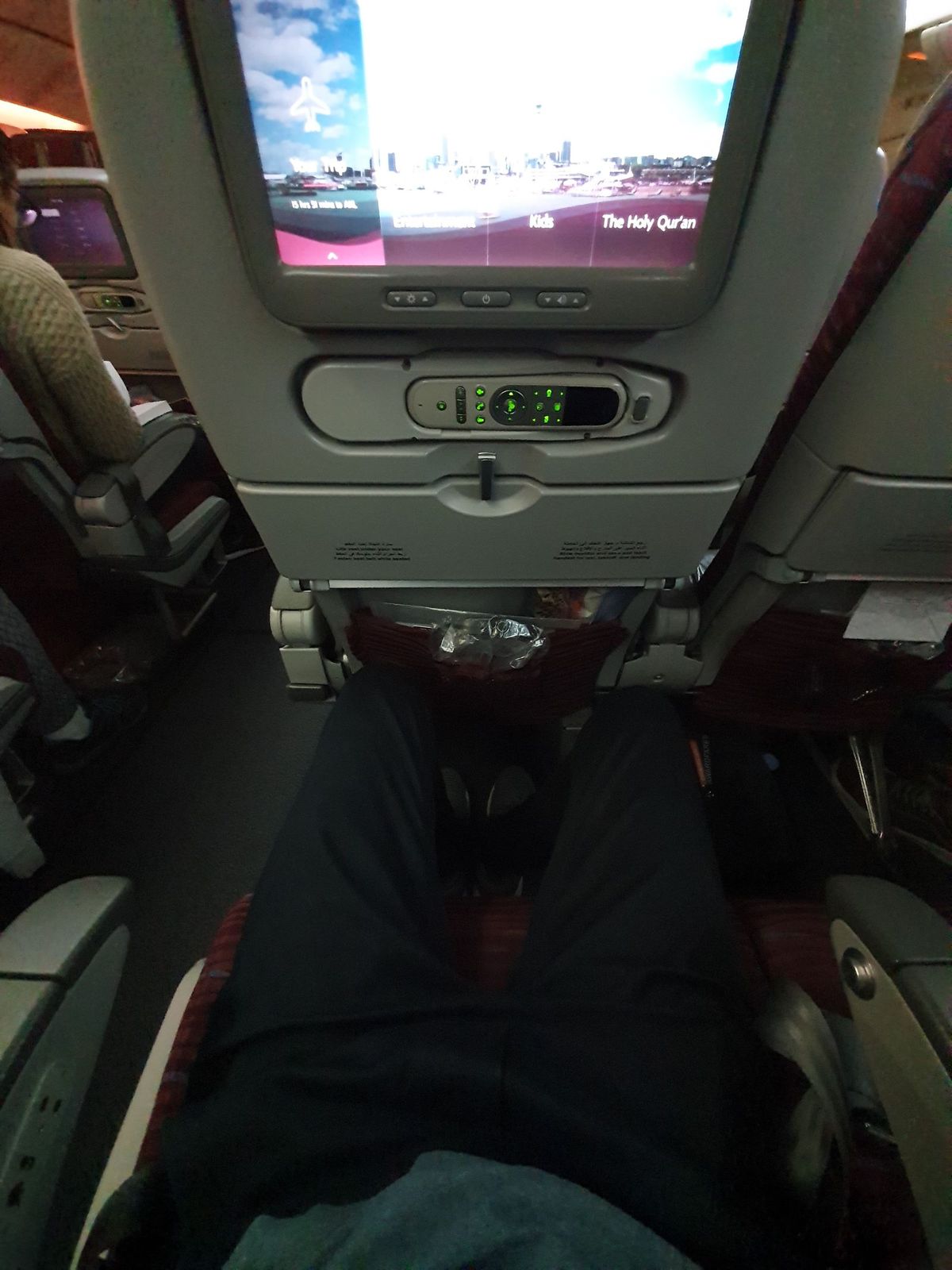 The first meal service started shortly after take off. Menu cards and refreshing towels were handed out. Again I was impressed by the fact that three meal options were offered for both the first and second meal. 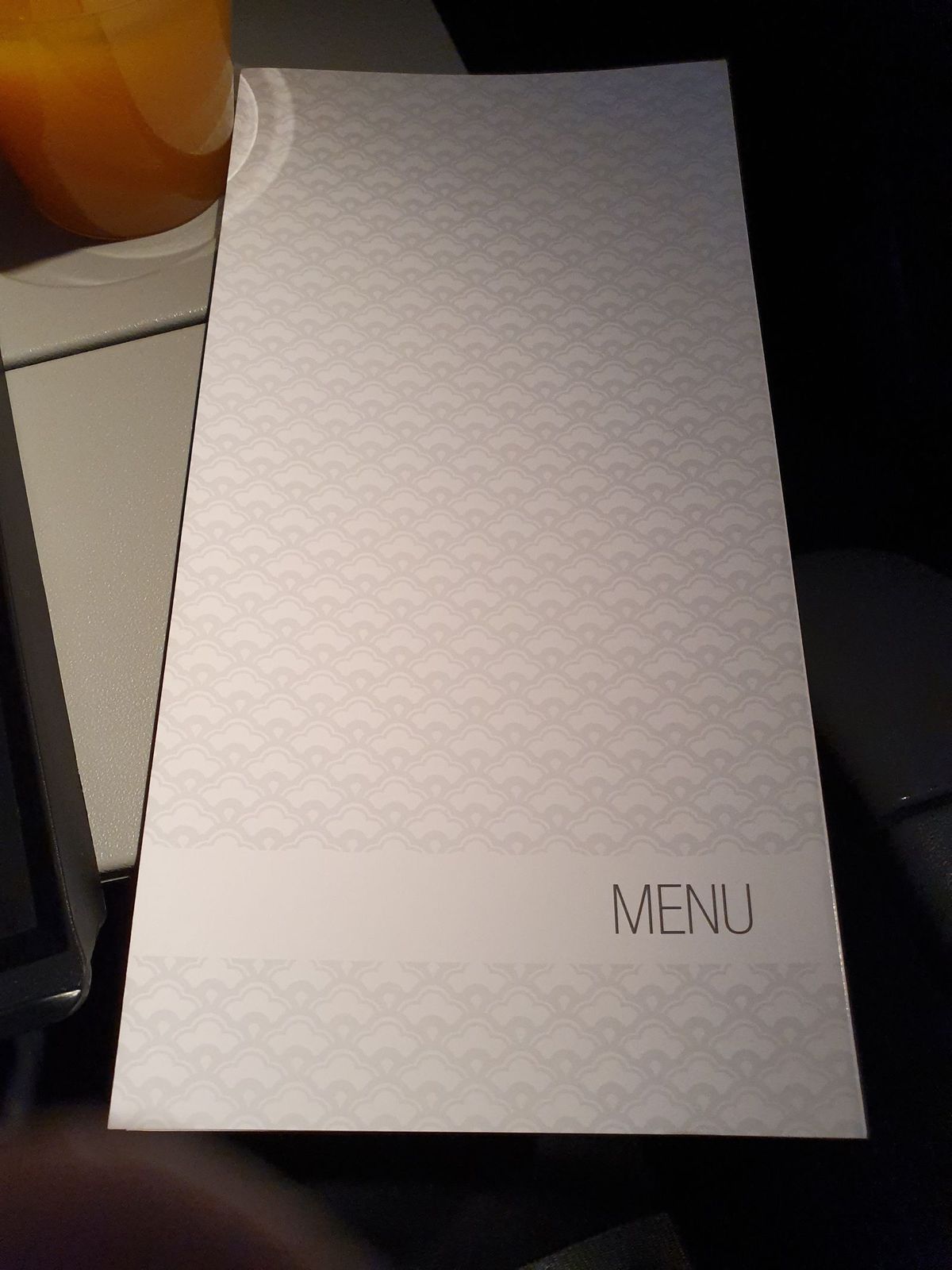 For the first meal service I chose the green curry, which was tasty but definitely not as good as the lamb stew on the previous flight. 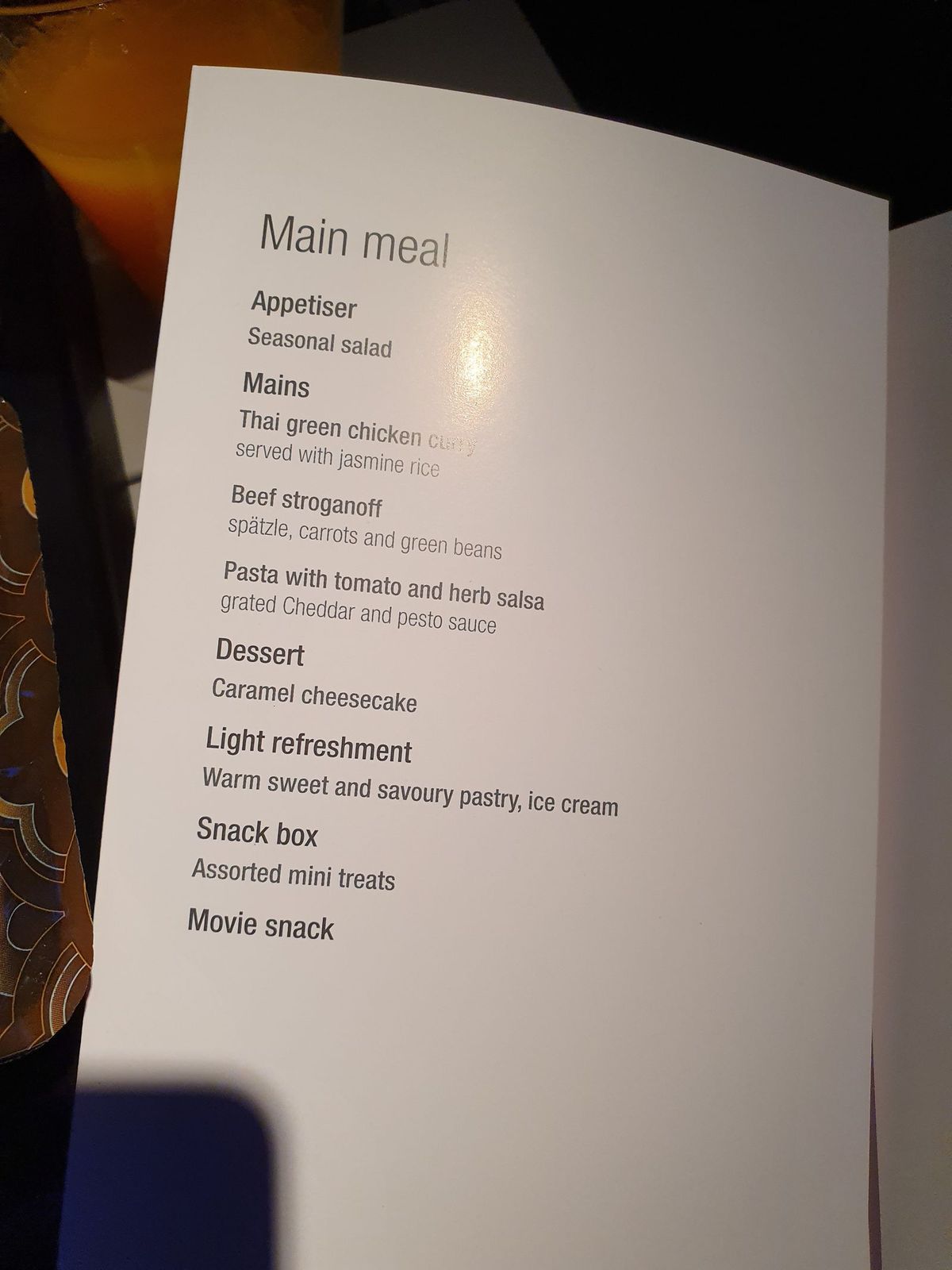 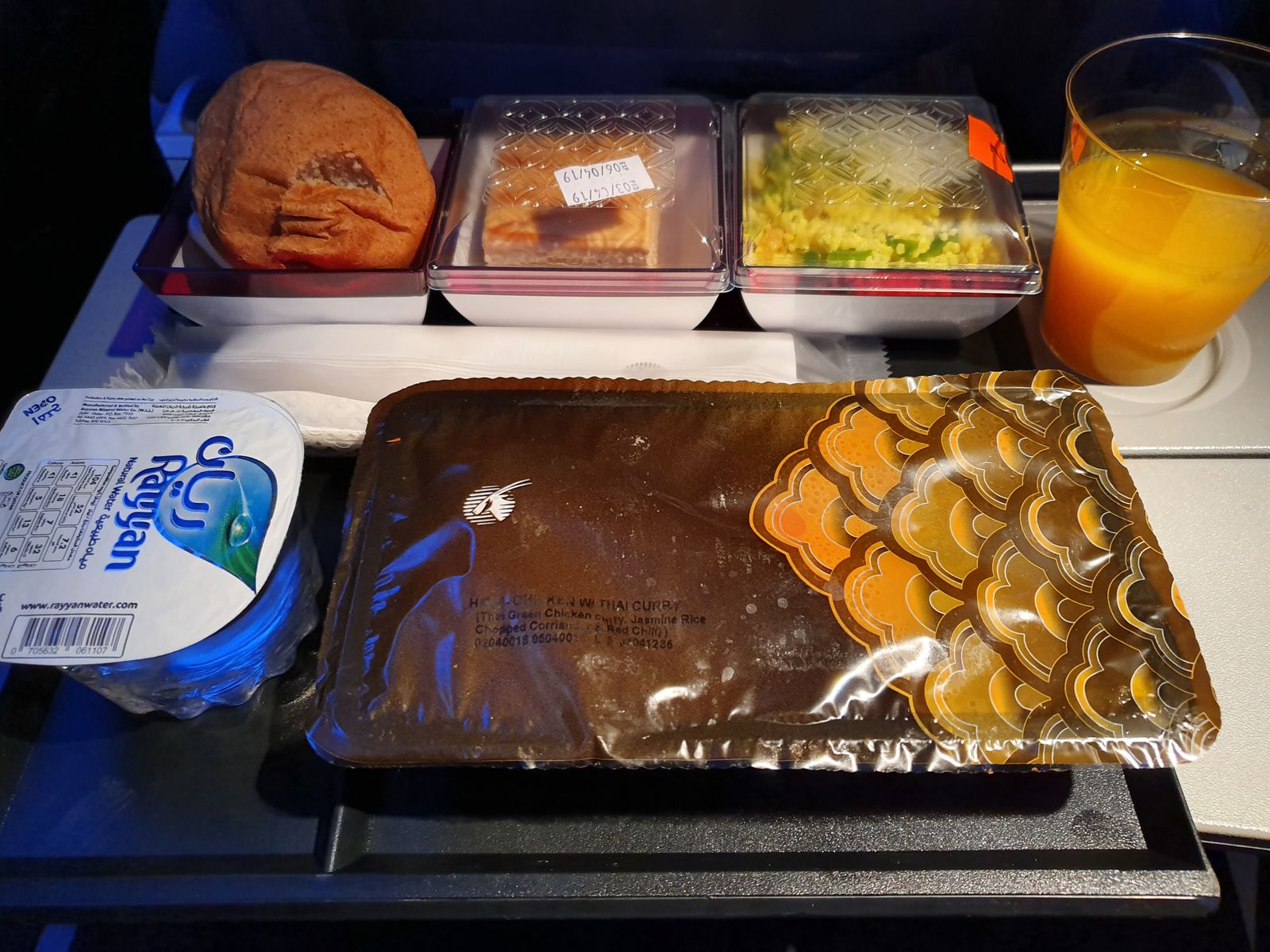 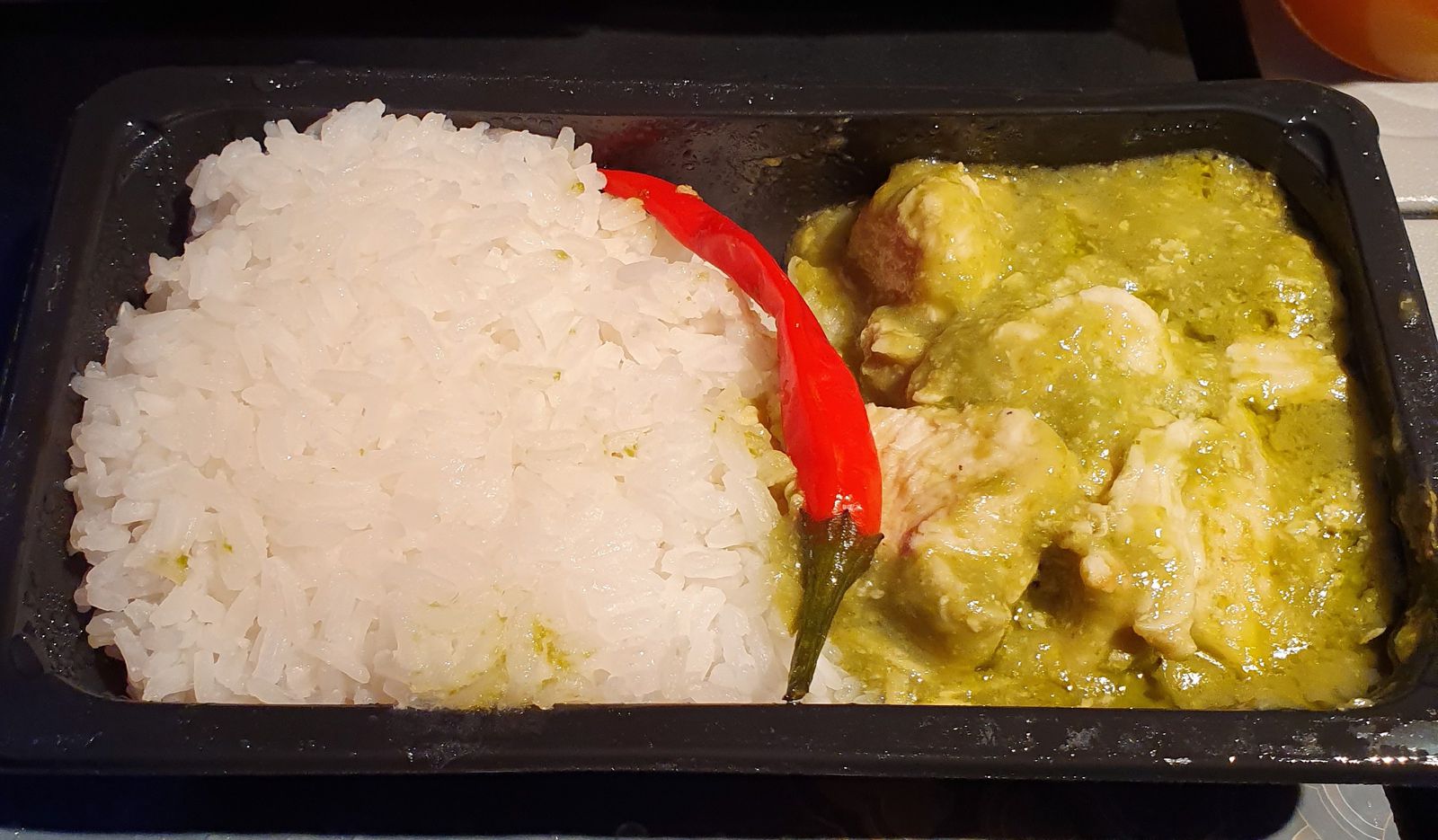 After dinner I was exhausted and decided to get some sleep. I slept surprisingly well on and off for the next 10 hours which definitely helped cut out a large chunk of this long flight. During the entire flight the crew was very attentive and regularly passed through the cabin offering snacks and beverages. 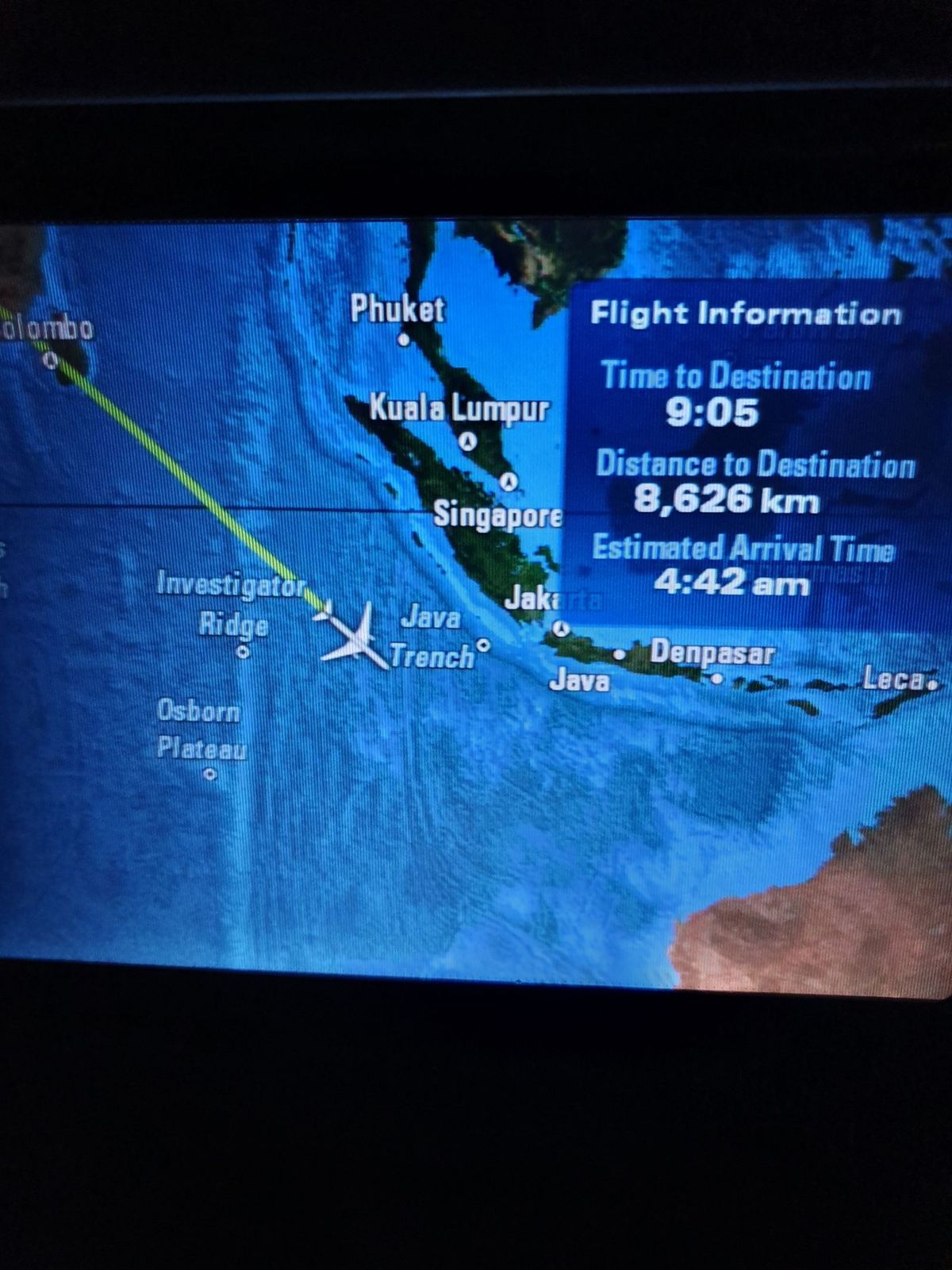 About 2 hours before arriving in Auckland breakfast service started. Again, three options were offered. I decide to try the stir-fried egg noodles since I’m not a huge fan of western breakfast. It was totally fine. 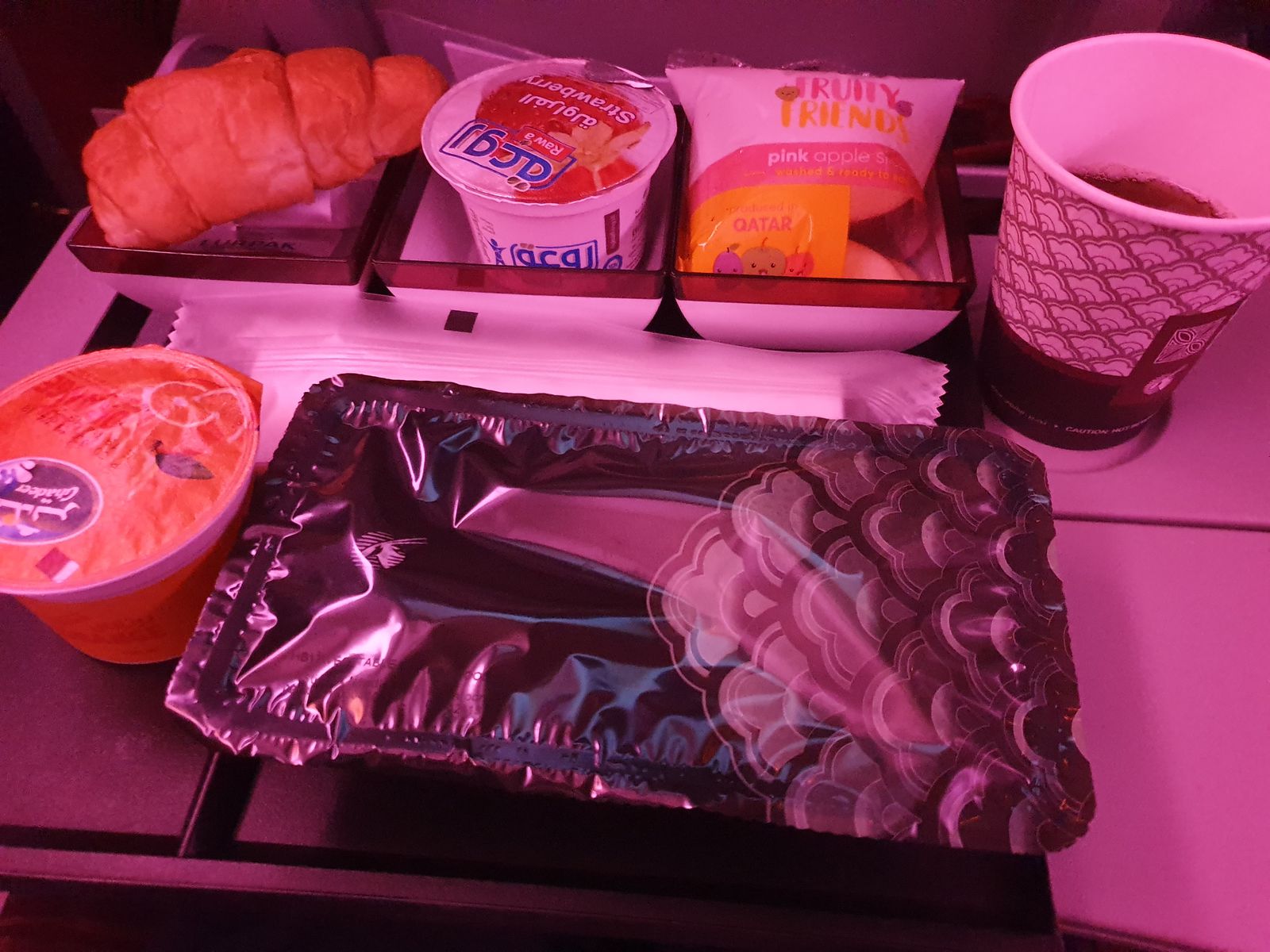 Overall I was very impressed by Qatar’s economy product. Even though the trip to Auckland was very long I felt surprisingly well-rested after arriving in Auckland. The seats were comfortable and legroom was fine. Service was really good and friendly on both flights. I have several more Qatar flights this year so I’m looking forward to see if I will be just as happy on those flights as well.