Earlier this year I was trying to book a flight from Miami to Buenos Aires, Argentina, and I was checking AwardFares for seats available using my SAS EuroBonus points. I saw two seats available in Business Class with Copa Airlines, and I booked them right away.

This is the review of the first leg of that itinerary, from Miami to Panama, on a Boeing 737-800.

It was an early flight that departed 6.30. I got the airport around 4am and the terminal was quiet and with very little movement. The Copa check-in desks were open and only few passengers were queuing. I went through the priority lane and the whole check-in process took less than three minutes. The agent was very kind and checked-in my luggage all the way through Buenos Aires.

Right after check-in, I went through security. There was an agent controlling the passport and boarding pass at the entrance of the queue. In the US, they also check your identity right before the x-ray machines. The queue was almost empty, so the whole process took about 5 minutes.

Right after security, I went straight to the Turkish Airlines Gold lounge, but since I opens at 4.50am, I had to wait about 30 minutes outside. I walked around the Terminal and took some pictures. The building was almost deserted, all the coffee shops were still closed, and a few people sleeping. 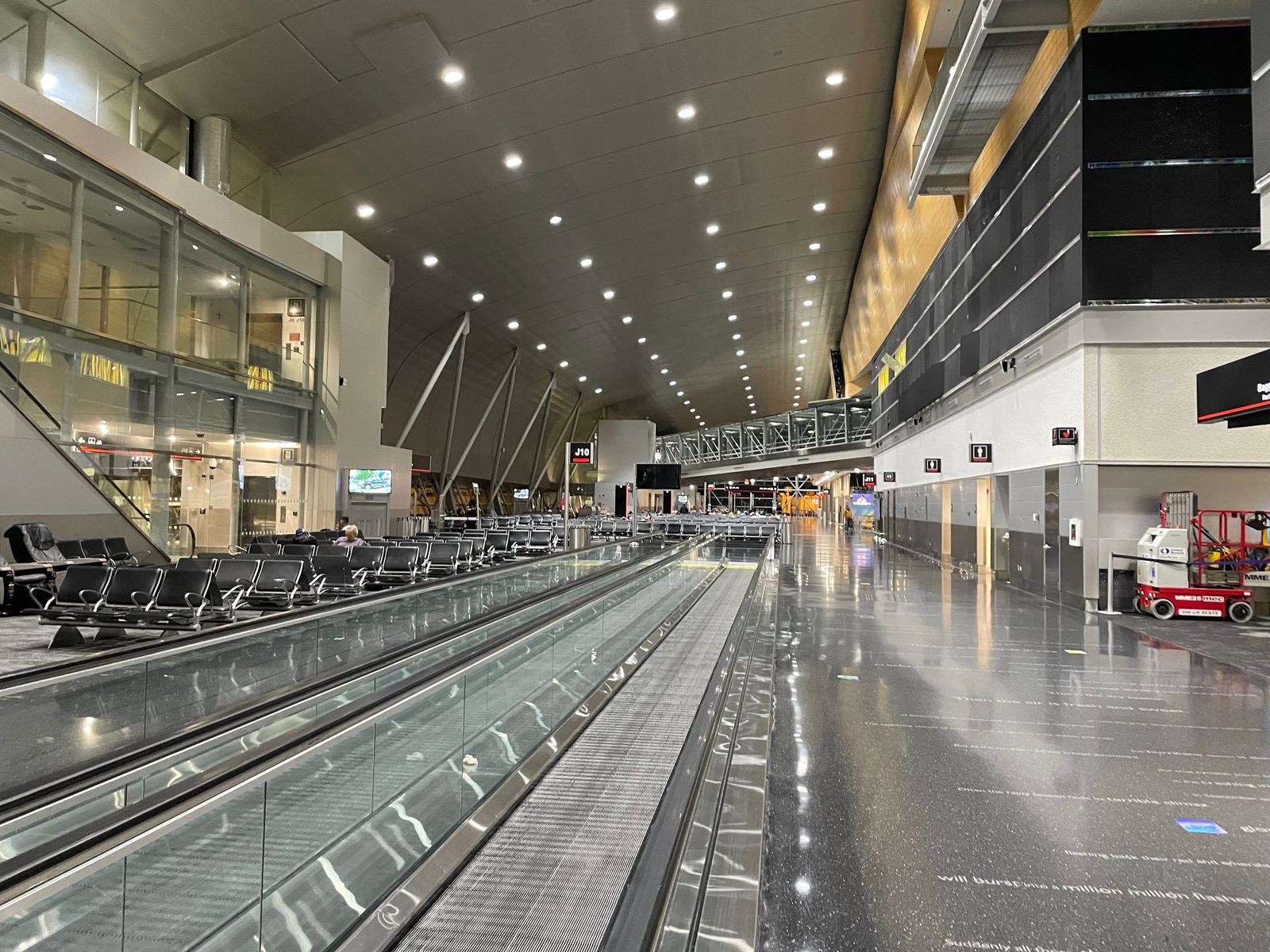 Once the lounge opened, I went in to grab a coffee and a quick bite. The lounge is big and spacious. It was recently opened, so all the furniture and design is modern and updated. The only drawback was that they still had a COVID protocol in place, so you cannot grab food by yourself. Instead, there is a member of a staff that is ready to serve you. This is also true for the coffee (yes, you cannot use the coffee machine by yourself).

I got a quick coffee and grab some sandwiches. Then I did a quick tour around the lounge to take some pictures, went to the restroom and headed to the gate.

When I arrived at the gate, after 15 minutes walking from the lounge, the aircraft was waiting there. Copa operates only single-aisle planes, mainly the 737-800 and 737-900, but also some Embraer for Copa Connect (regional carrier). Recently they restarted using the 737max on longer routes such as Panama-Buenos Aires or Panama-Santiago.

After waiting for about 10 minutes, boarding started. People have been queuing for quite a while, but it was so early that the process was quiet and smooth.

The seat was a wide recliner seat in blue leather. There were only a few signs of being worn out, but overall the cabin was sleek and clean. The plane has the sky interior with colored LED lights, it felt very intimate and soothing. There was no in-flight entertainment other than the overhead screens.

Once seated, I was offered a welcome drink, juice or water.

We took off on time and there was a bit of turbulence right after takeoff. It very cloudy that morning, but after climbing 10k feet, there was a beautiful sunset and no more turbulence. 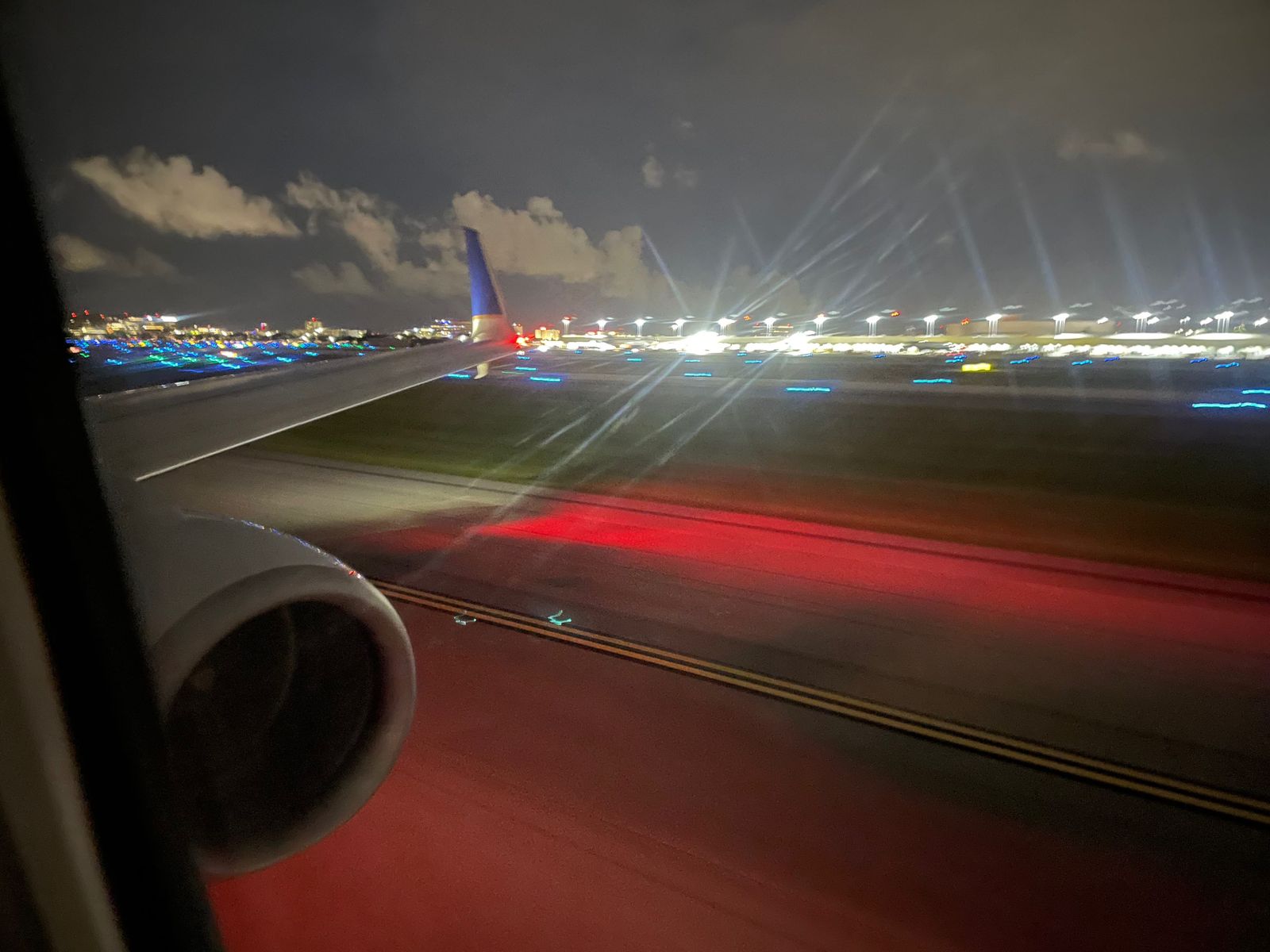 Nearly 20 minutes after takeoff, the breakfast service started. Given that the flight was so early, the flight attendant came asking who wanted the service and who preferred to sleep. The cabin was never lit up and the lights remained dimmed.

The breakfast options were a Montecristo Sandwich or a Salmon Bagel. I went for the bagel, which was warm, and surprisingly had cooked salmon. Besides that, the service had a bag of chips, fresh fruit, yogurt and coffee. 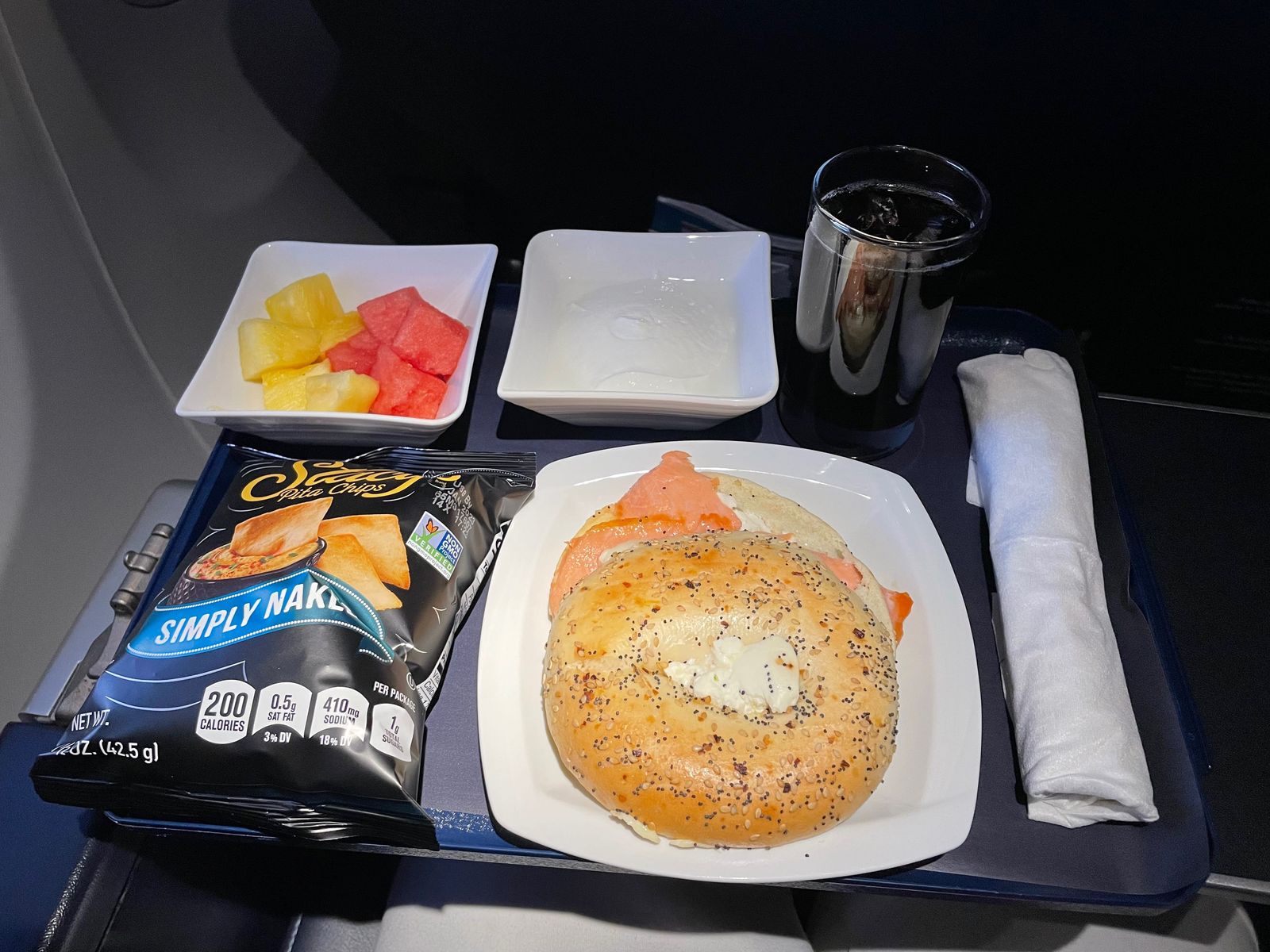 After breakfast, rested for a little while and soon we were approaching. The approach in Panama is nice because you can see a mix of tropical forest, plus the entrances of the Panama channel.

The short ride in Business Class from Miami to Panama with Copa Airlines was excellent. Departure was on time, the aircraft feels modern despite the age, the crew was very attentive, and the service was delicious. The lack of IFE could be a downside, but they use these planes without IFE on short routes only. Copa plans on replacing their 737-800 and 737-900 by more 737max with their newer cabin, fully-flat seats and a better IFE. I wouldn’t hesitate flying Copa again or recommending their service. Most often, their award availability and rates are worth it compared to other airlines.

Germán is the main editor at AirLapse, a travel blog based in Sweden. Logging well over 560 flights and 1.5 million kilometers around the world (38x around the Earth), he writes about tips and tricks for flying, travel industry news, and narrates his adventures onboard. Germán has been using AwardFares since first released and made over 30 award redemptions identified using the tool.