Review of China Airlines Economy A350-900 Amsterdam to Taipei 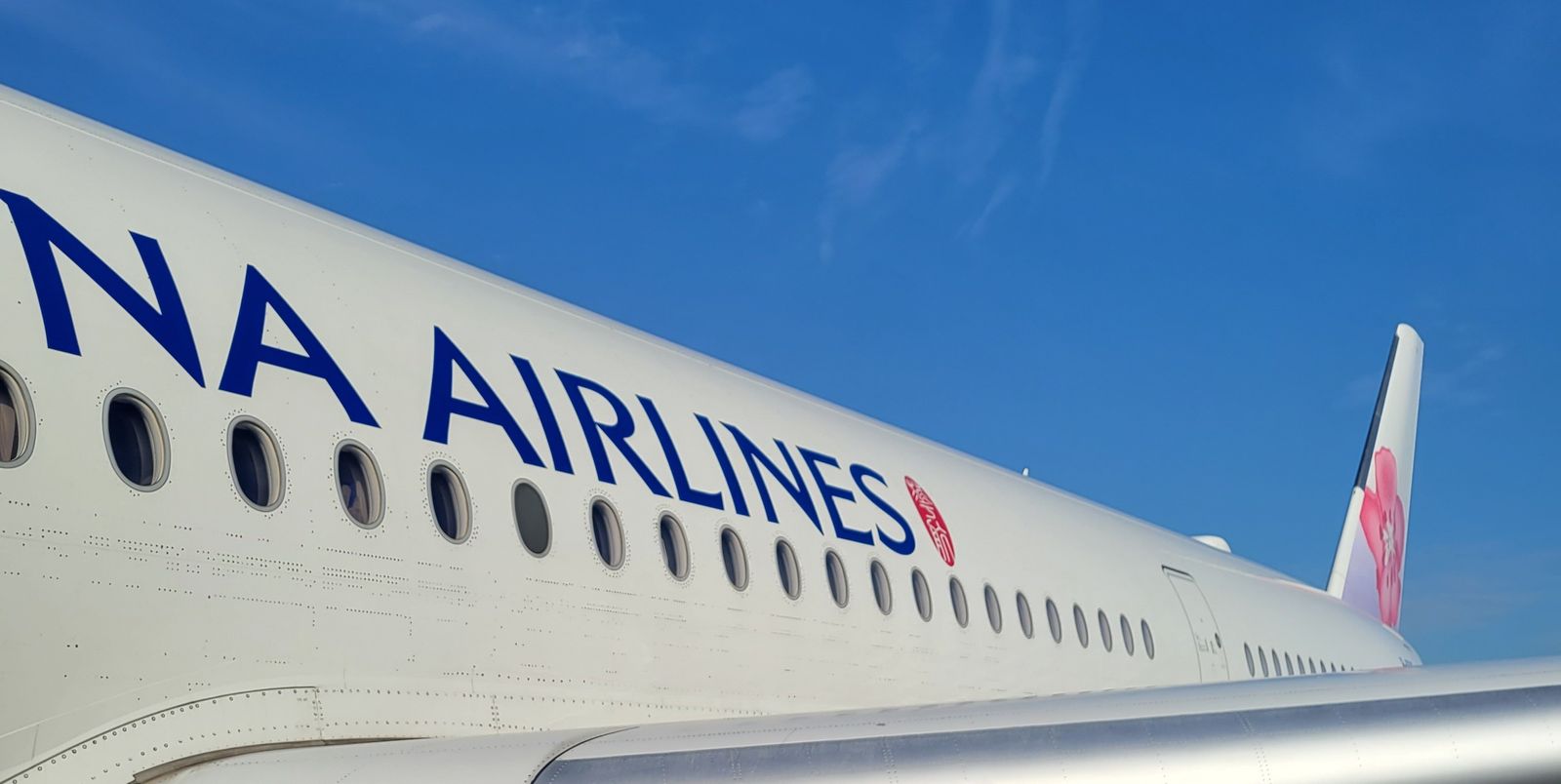 After having recently acquired my SkyTeam Elite Plus status, through the Delta Skymiles status-match program (matching my BA Executive Gold), I was looking forward to try my first long-haul SkyTeam flight onboard Taiwan’s state-owned carrier. A long 13.5 hour flight from Amsterdam (AMS) to Taipei Taoyuan (TPE) and then connecting onwards to Tokyo.

One thing I learned is that SkyTeam status doesn’t really seem to provide any seat-selection perks. When booking my China Airlines flight, I was not able to select any seat (at all) for free. So instead, I waited and hoped that I’d be able to select a good seat for free during online check-in.

Luckily, when I arrived at the airport, the check-in staff was able to move my seat from 73K (a window seat in the very back), to one of the bulkhead seats on the first row of economy. The seat next to me stayed empty, which was an added bonus.

If I had known I wouldn’t be able to choose my seat during online check-in, I probably would have just paid for the seat in advance.

Check-in was smooth. China Airlines ground services are handled by KLM at Schiphol, so you check-in at the KLM counters. Thankfully I was able to use my SkyTeam status to skip the long economy check-in queue, and instead use the Business queue.

I did run into some problems at check-in (not because I was traveling to Taiwan, which was opening up their borders the day I was arriving), but because the “computer says you need a visa to enter Japan”. After some time, the check-in staff was given approval to check-me in, since the Japanese border was in fact open, and had been for a couple of days.

I was hoping I’d be able to use my SkyTeam status to access the Fast Track security screening. However, for some reason it seemed the Fast Track was closed. As it was a busy morning, security and passport control almost took an hour. (I have since learned that there are multiple security entrances at Schiphol, so I probably could’ve tried a different one.)

I then proceeded to the KLM Crown Lounge, KLM’s flagship lounge. I guess something was weird with my SkyTeam status, because scanning my boarding pass did not let me into the lounge. Instead I had to pull up my Delta app and show my Delta Skymiles status.

Once inside, I did manage to find an empty corner to relax for a little bit. Unfortunately I didn’t have enough energy at this point to explore the rest of the lounge.

SkyPriority boarding was available, but it turned out we would be boarding by bus (the first time I’ve ever had to do that at Schiphol), so I guess there wasn’t much point to the priority boarding anyways. Although I much prefer boarding my a jet bridge, I do always enjoy boarding these large aircraft by stairs.

The A350-900 economy cabin felt clean and spacious (thanks to the 3-3-3 layout). Nothing more or else than what I’d expect from other Far East Asian carriers. I was glad to have snagged a bulkhead seat, which offers plenty of legroom, something I’d really come to appreciate on this long flight.

It was my first time seeing “Reserved Seat” signs on an aircraft. Surely all seats are “reserved”? I’m guessing China Airlines does this to prevent people from moving to a different seat after boarding, since the bulkhead seats normally cost much more to choose while booking.

Shortly after the noon takeoff, a lunch was served. Flavors were good, but the portion size was perhaps a little on the small size.

The overall meal service was my biggest issue with this flight. Normally I never really have a problem with getting hungry during flights, however, this was a bit of struggle. Around 7-8 hours into the flight my body clock was expecting to have some dinner (as it was nearing 8pm).

I asked the cabin crew if they’d be serving another meal, but unfortunately the answer was that I’d have to wait 4 more hours until the second (breakfast) meal service. I asked if they had any snacks to offer, and they said no, but eventually they did come around and offer some juice and bread.

I don’t think I was the only one who was getting hungry at this point, as I started to hear other passengers around me ask for bread as well. I guess the lesson I’ve learned is to always bring some backup food on these 12+ hour economy flights. 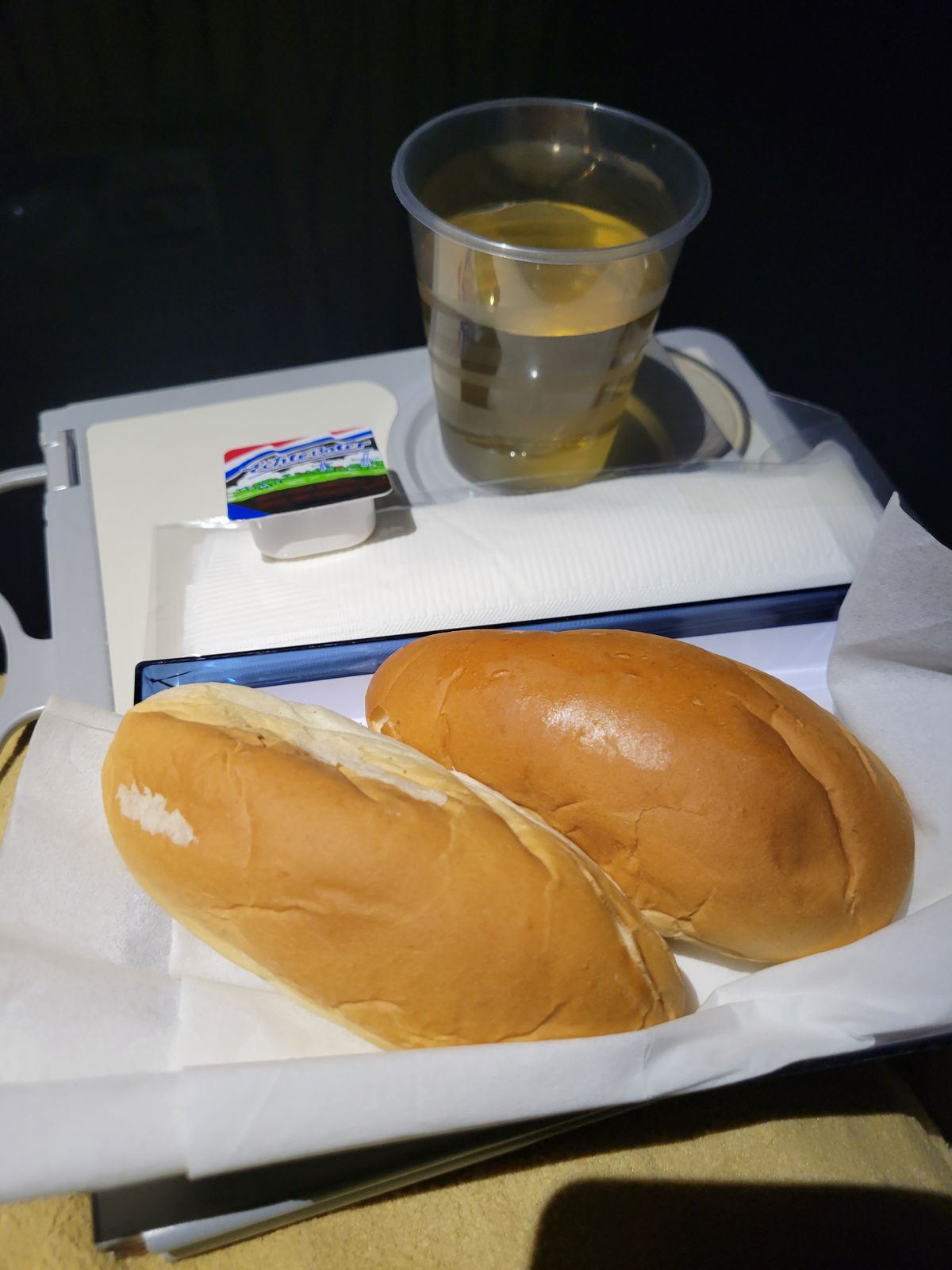 Eventually we touched down in Taipei, and unfortunately I had a long layover ahead of me until my next flight over to Tokyo. Luckily I knew that the Plaza Premium lounge has day rooms that you can rent. With nearly 7 hours it was an easy decision for me to rent a private resting room for 6 hours. 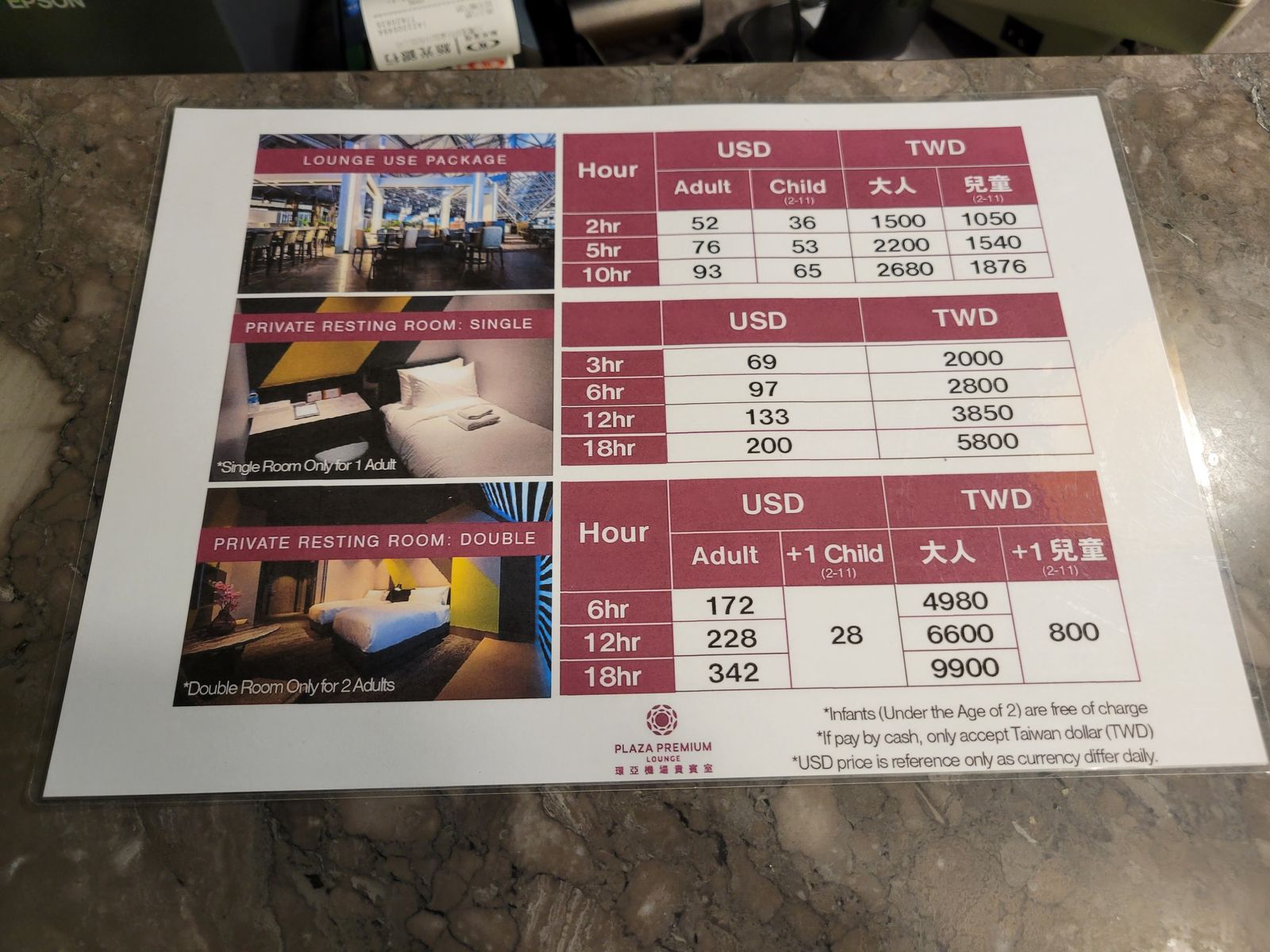 The room was very comfortable and gave me a much needed shower and a couple hours of sleep (well worth the cost!). I’ve used this particular lounge in the past with my Priority Pass. However, it seems they have temporarily (or permanently) stopped offering access via Priority Pass. Perhaps this will change once more of the other lounges at TPE start to open up again (as many have been closed since the beginning of covid). 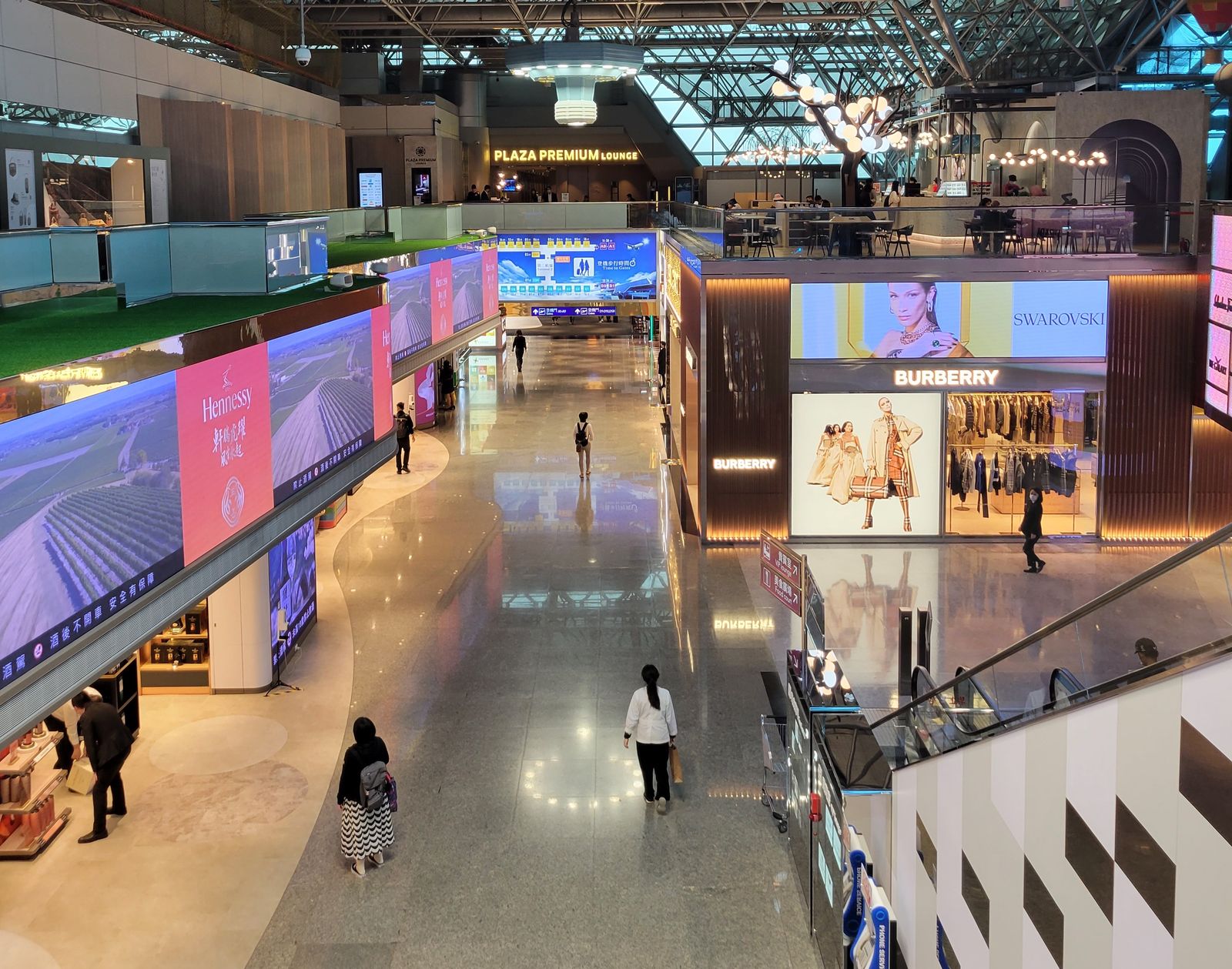 Although I did book one the cheapest options available at the time for this route, I still had to pay nearly $700 for this one-way economy itinerary (AMS-TPE-NRT), which is pricey, and given the price I think I expected a bit more.

Overall, I would say that Taiwan’s state-owned carrier offers a solid hard product. I appreciate that their economy cabin is quite spacious, with 3-3-3 seating with comfortable seats. Service was good, cabin crew was polite, but nothing really extra. The food service was definitely the biggest issue.

If I’m looking for the quickest way to get between Amsterdam and Taipei, I think it’s an option definitely worth considering (as long as you remember to pack some extra provisions). But, if your travel plans will include a connection in Europe or Asia, then I’d probably consider a different option instead.