Today’s journey started months ago when I read that Taiwan’s flag carrier, China Airlines, would be arranging a special 747 farewell flight as they would be retiring their 747 fleet. Furthermore, this wasn’t just a regular “flight to nowhere”. The goal was to fly to Japan, passing the iconic Mt. Fuji, and then return to Taiwan. Since I’m currently living in Taiwan I thought I would try to get a ticket on this special flight. 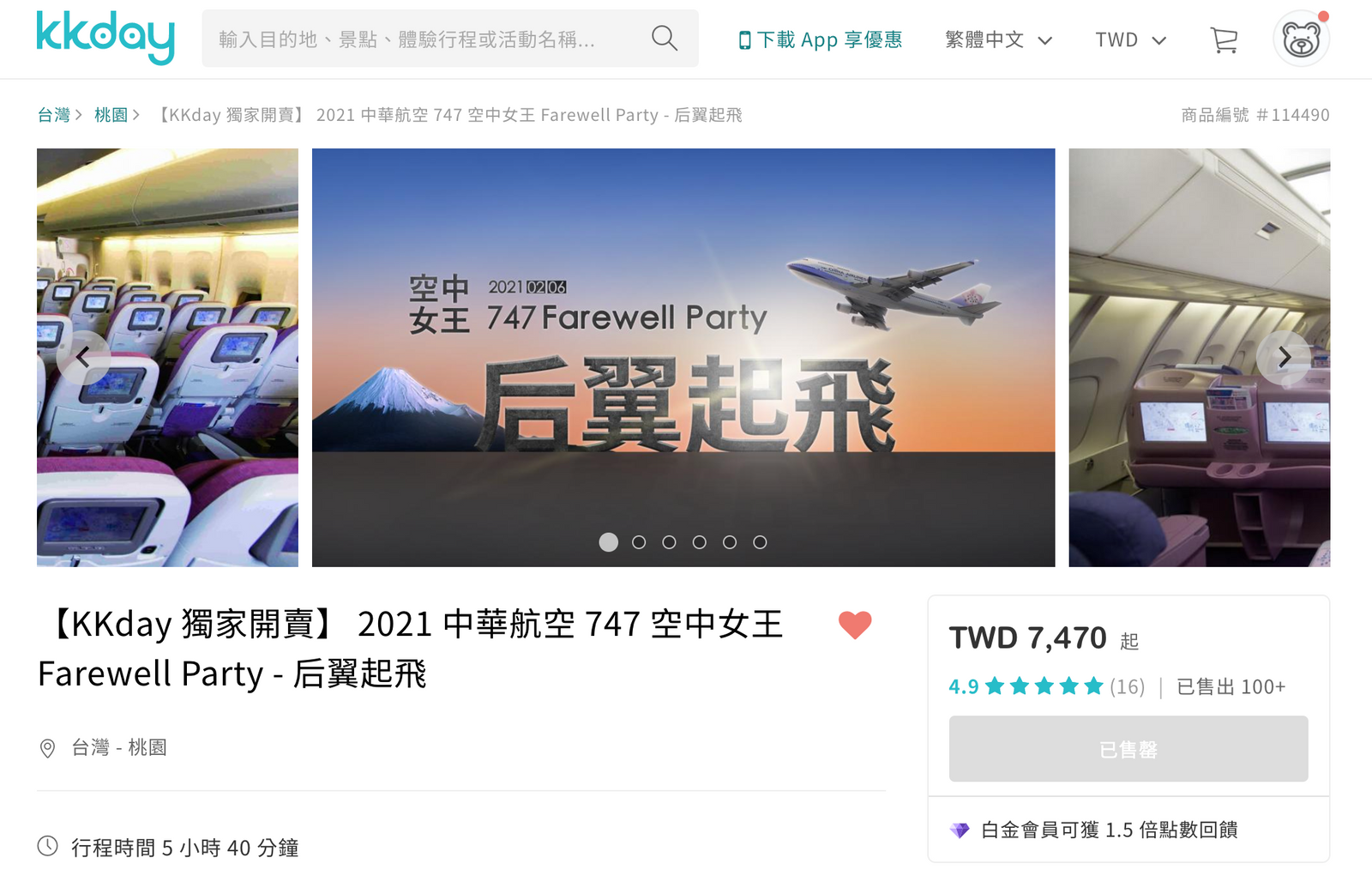 I knew there would be a lot of competition getting tickets for this flight. My first attempt was to book business class. However, that failed and I made another attempt and luckily was able to get an economy ticket instead. Apparently they sold out within a couple of minutes!

Today’s flight departed from Taoyuan Interntional Airport (TPE), heading north-east towards Japan, flying past Mt. Fuji, and then returning back to Taiwan. With a scheduled flight time of just over 5 hours, this would definitely be the longest flight I’ve taken in a long time! 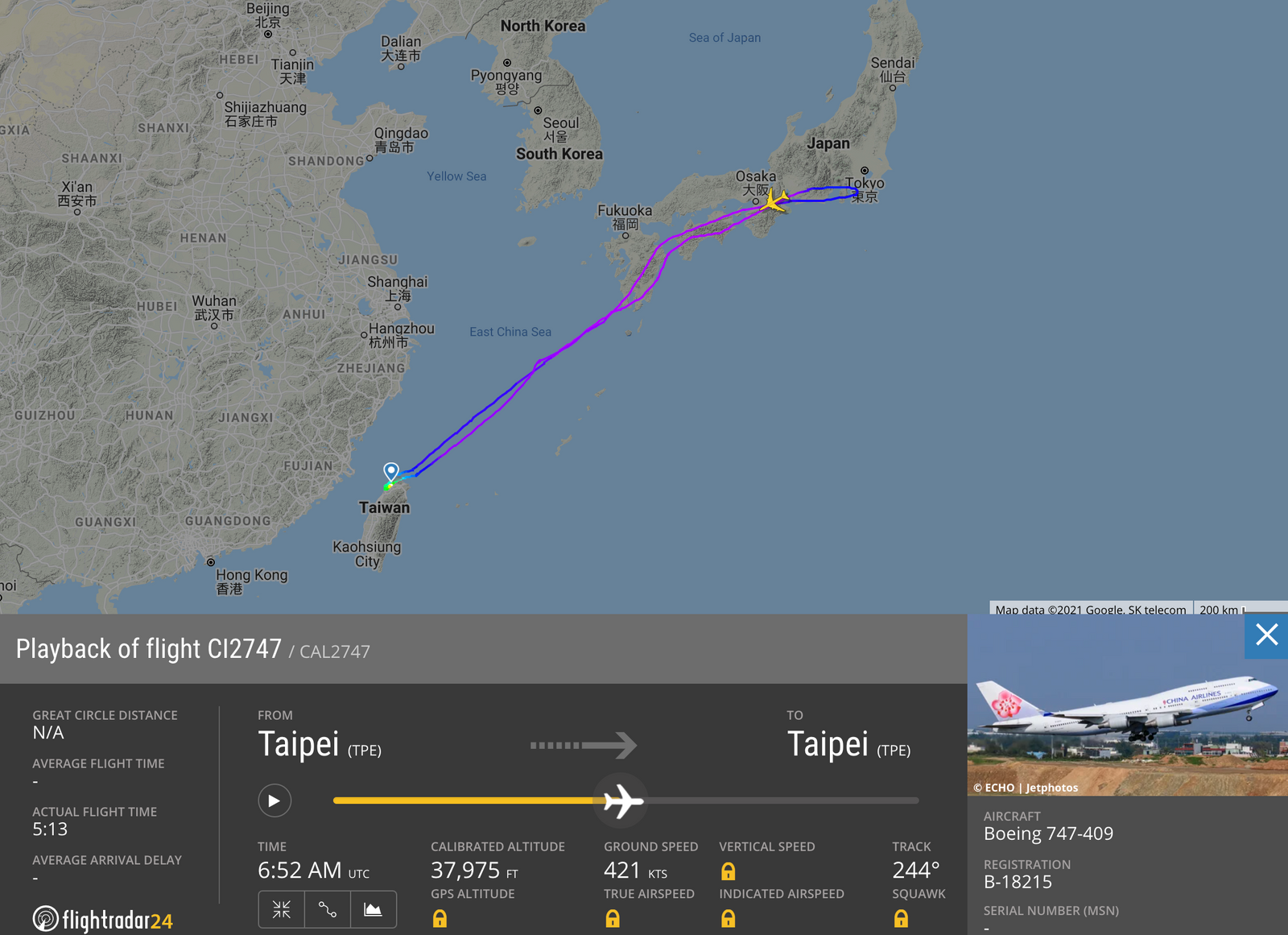 The assigned flight number was appropriately chosen to be CI-2747.

Check-in started at 7:47 in the morning on March 20th, 2021. It was fun to see my flight with Destination Taipei on the departure board!

At check-in my travel companion and I were initially informed that we wouldn’t be sitting together. We were not happy to hear that as we were really hoping to sit together for this 5+ hour flight. It seemed KKDay (the Taiwanese travel agency where I purchased the tickets) had issued our tickets separately even though they were booked together.

After some back and forth in English and Chinese, the ground staff finally managed to arrange different seats for us, which we were very thankful for!

Security and passport control was a breeze. The interesting thing about this flight was that we had to pass through passport control into the international departures area of the airport, although we were clearly not “leaving the country” since we would be coming straight back to Taipei later. As I don’t have a Taiwanese passport I had to show my Taiwanese residency card, which was one of the requirements for foreigners travelling on this flight.

It was quite surreal seeing the airport so empty. The last time I passed through Taoyuan Airport was almost exactly one year ago, just before Taiwan completely closed their borders. Travelling was definitely a very different experience back then, compared to today.

Most of the lounges were closed, but there were a couple of restaurants and cafes that were still open. All of the duty-free shops seemed to be open as well. Apparently passengers on today’s farewell flight could receive extra discounts, but there was nothing in particular that interested me.

When I arrived at the departure gate area, the pre-departure celebrations were already in full swing. There were a couple of presentations, lots of photo opportunities and some giveaways.

Before departure, we were also given a chance visit the first class and business class cabins. It was my first time onboard a China Airlines plane so it was interesting to have a look. As expected, the cabin seemed a little dated.

Unfortunately we weren’t able to go up and see the upper deck cabin.

Just after 11:00 boarding started with First Class, Business Class and status members. There was no pre-boarding for me today, as I was sitting in Economy and have no status at all with any SkyTeam airline. However, as I was sitting at the very back of the plane, I was in the first boarding zone for economy passengers.

After a long walk to the very back of the plane, I found my seat on row 61.

The economy seats looked quite new, and were comfortable and not too narrow. The biggest drawback was probably the tiny IFE screens, however, that wouldn’t be a problem today as I wasn’t planning to be watching anything on this flight. 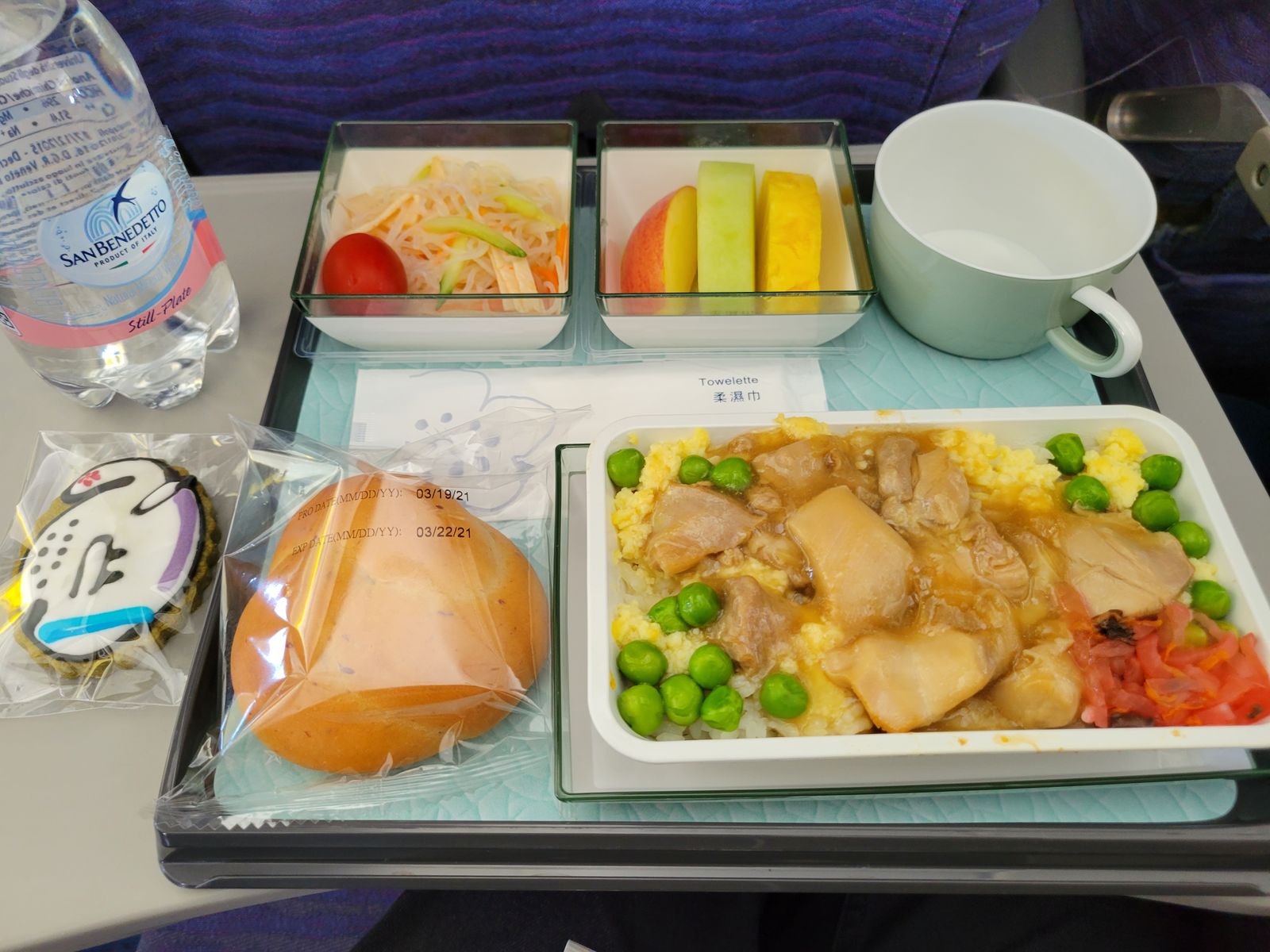 Shortly after departure, meal service started. Two choices were offered for today’s meal, chicken with rice or shrimp with noodles. I went for the chicken, and was very satisfied with my choice.

I don’t think I’ve ever seen so many cameras on a plane before. It seemed almost everyone was filming or taking photos of every moment. It was fun to see, and the energy onboard was great. I guess it’s safe to say that there are plenty of travel and plane enthusiasts in Taiwan.

As we approached Mt. Fuji, competition for window views was getting quite fierce.

Our flight made two passes by Mt. Fuji. 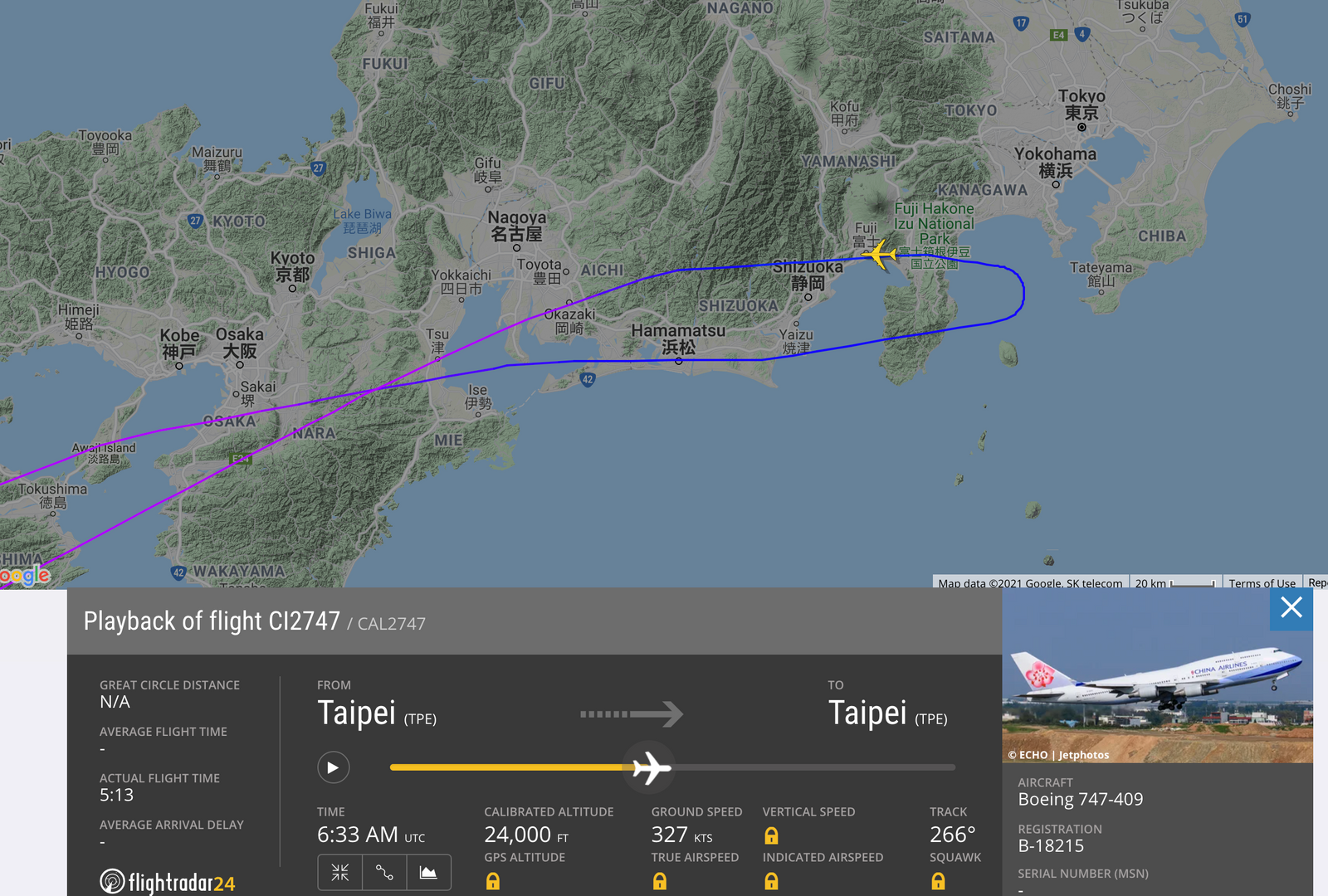 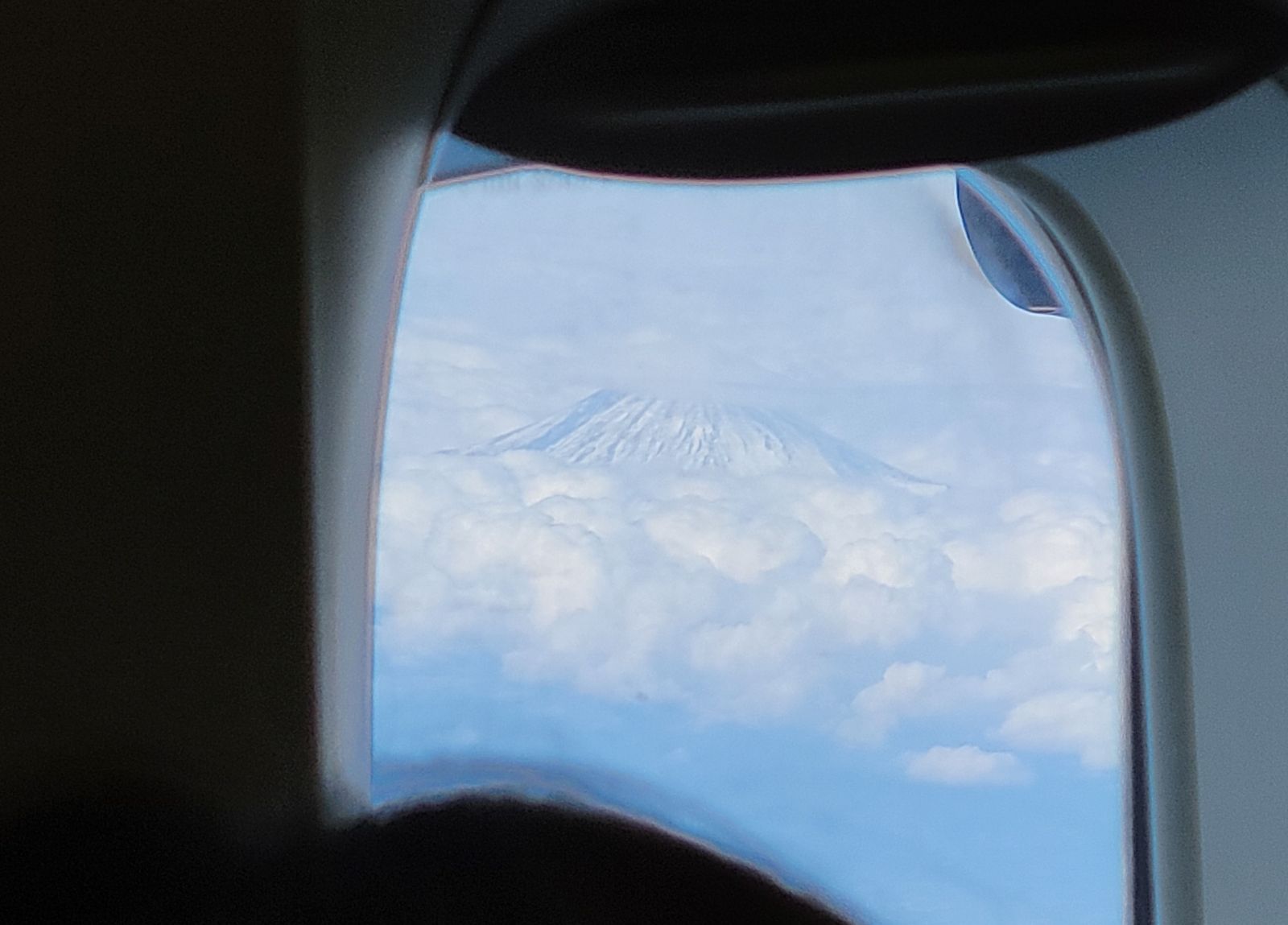 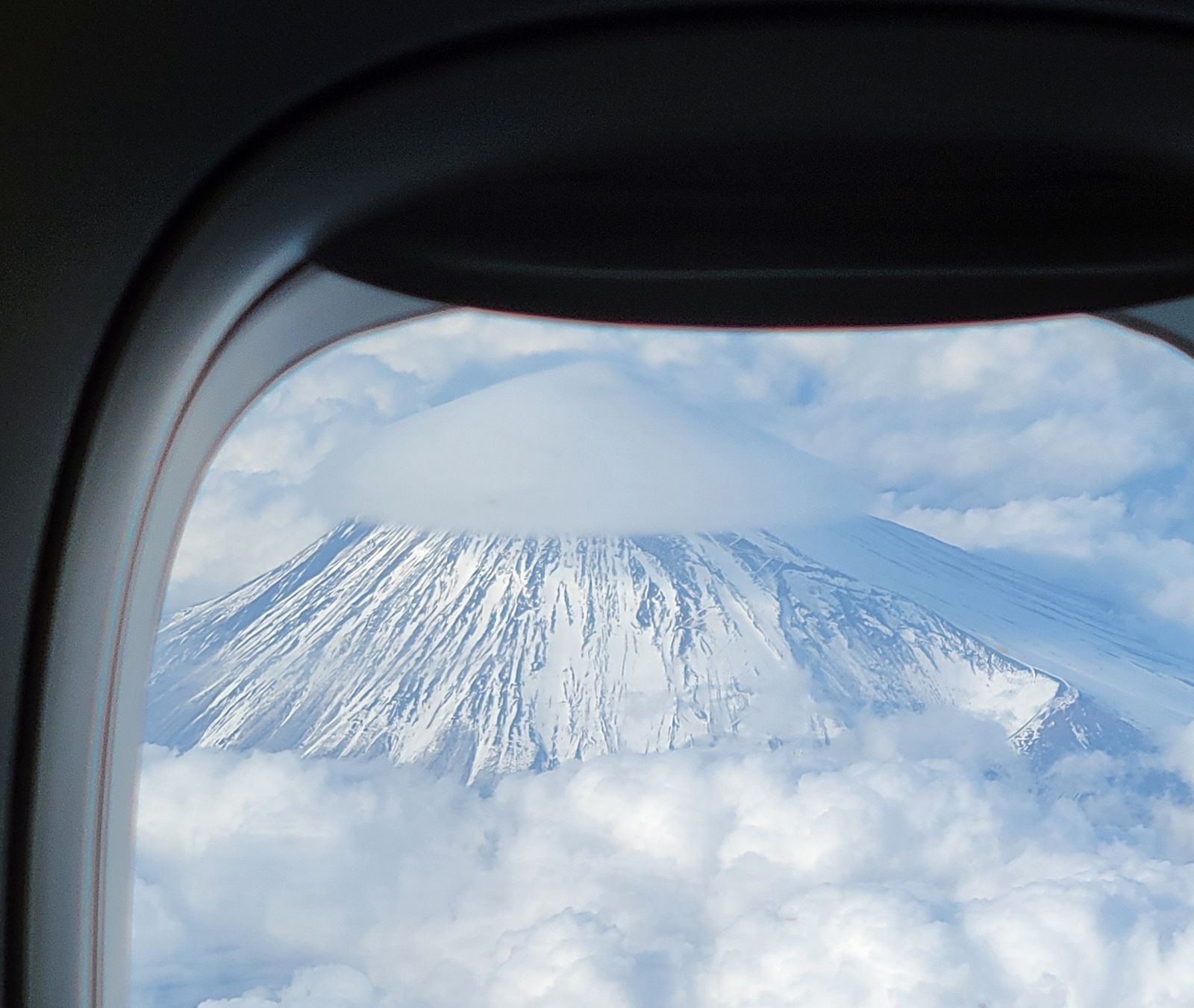 Through-out the rest of the flight back to Taipei, the cabin crew passed through the cabin handing out more gifts, including cupcakes and postcards. 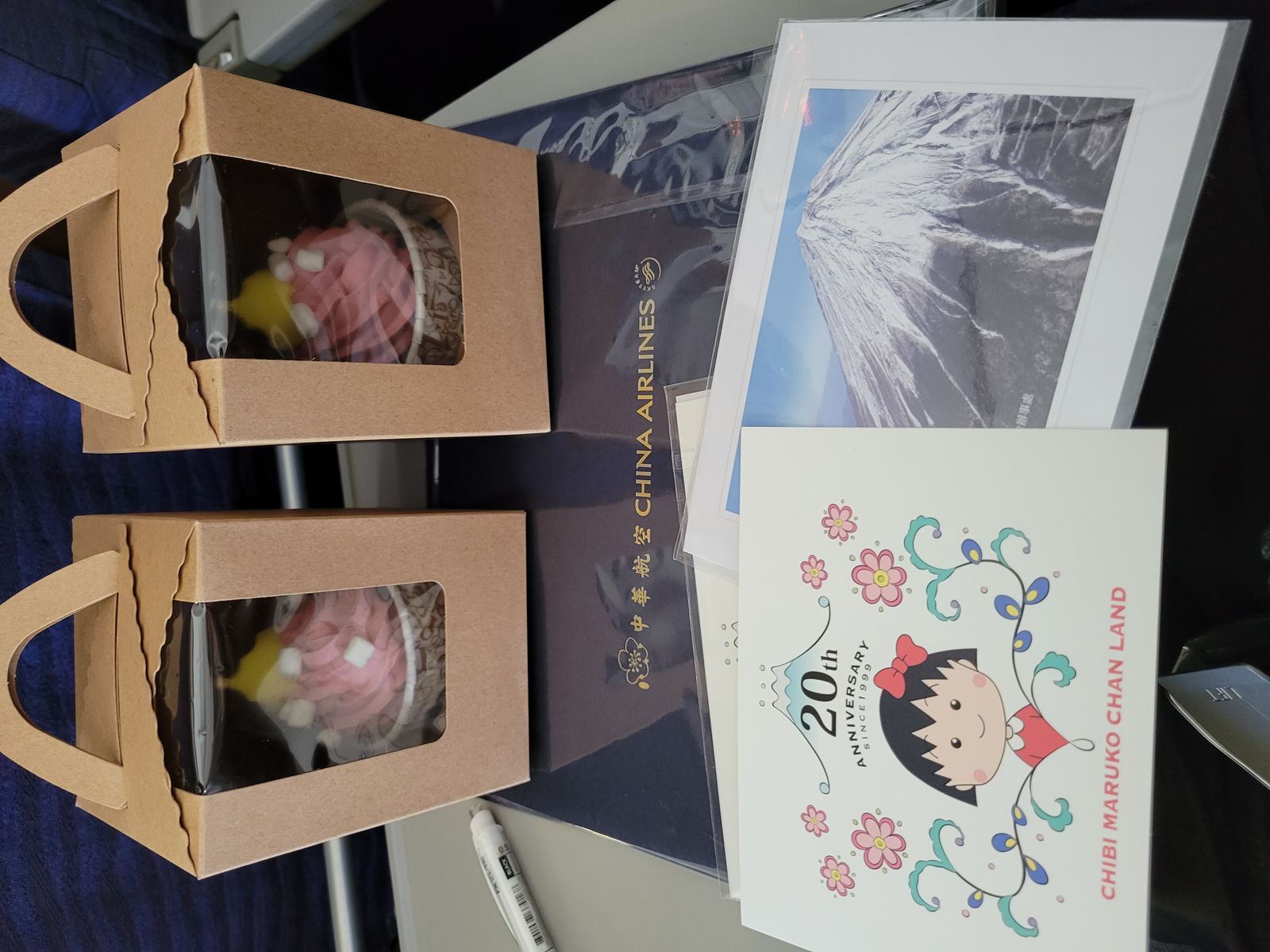 We were also given a very nice flight/boarding certificate. 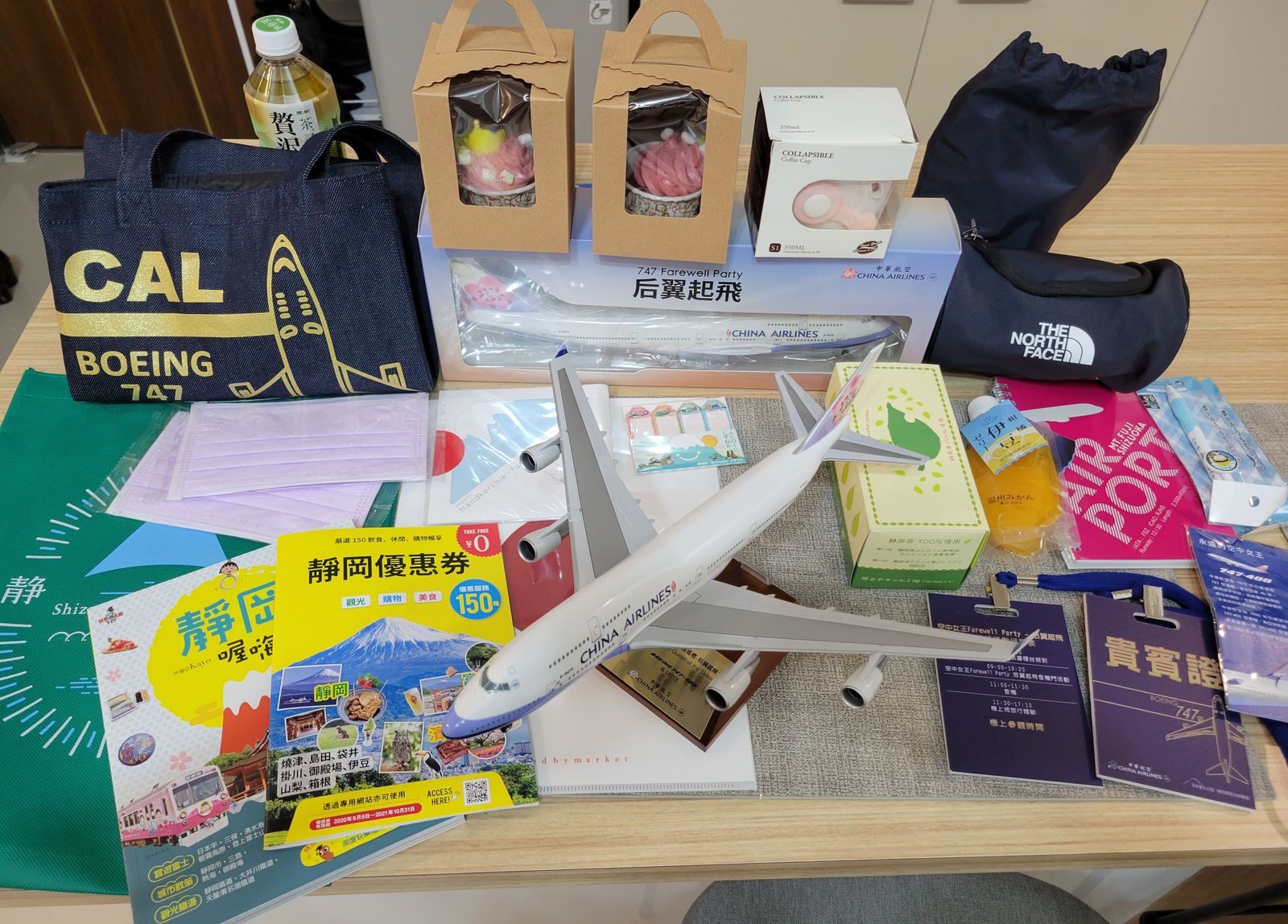 But, the highlight was probably the exact model replica of the 747-400 aircraft we travelled on today (including the same registration number). 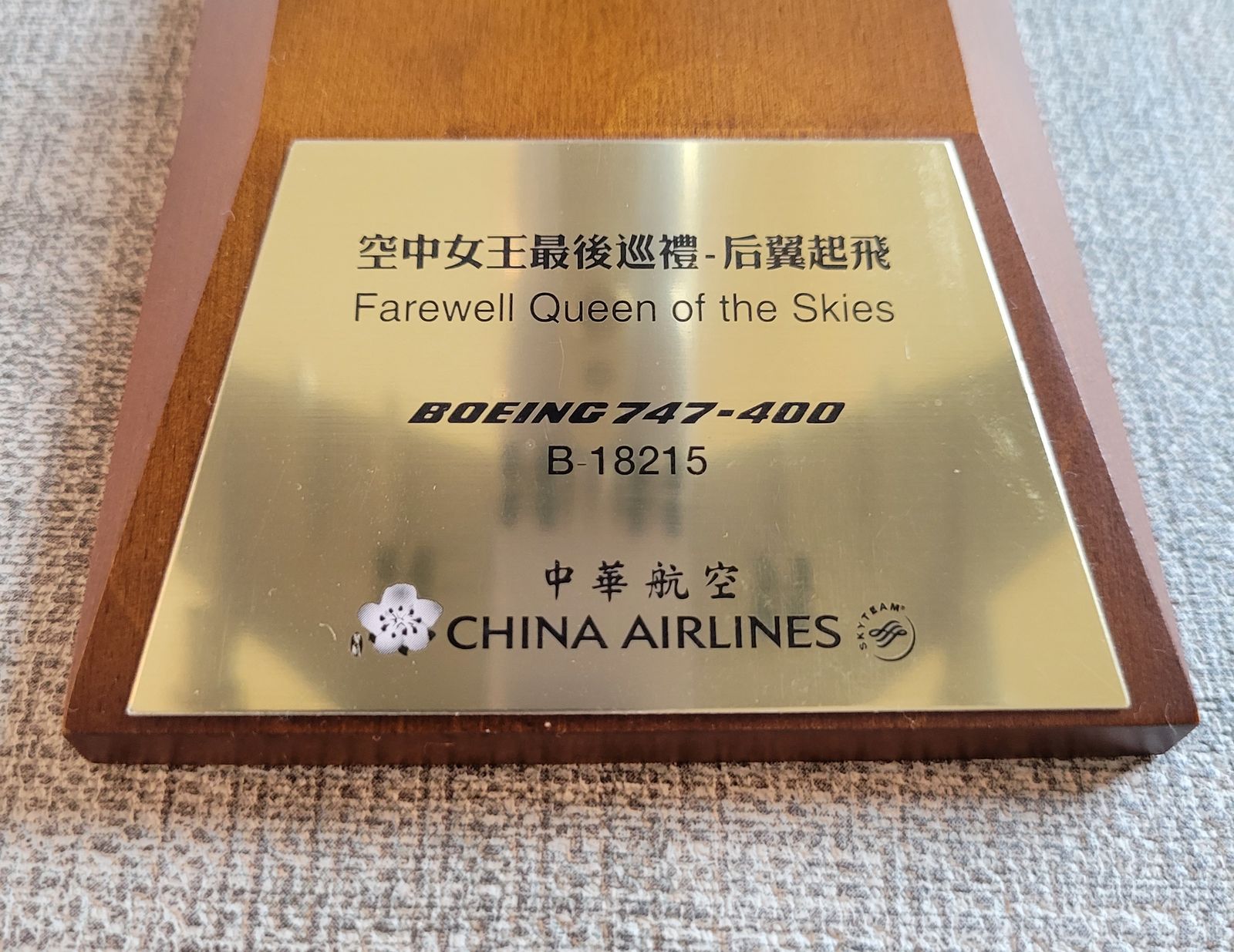 I’ll definitely be keeping that as a memory of this fantastic experience!