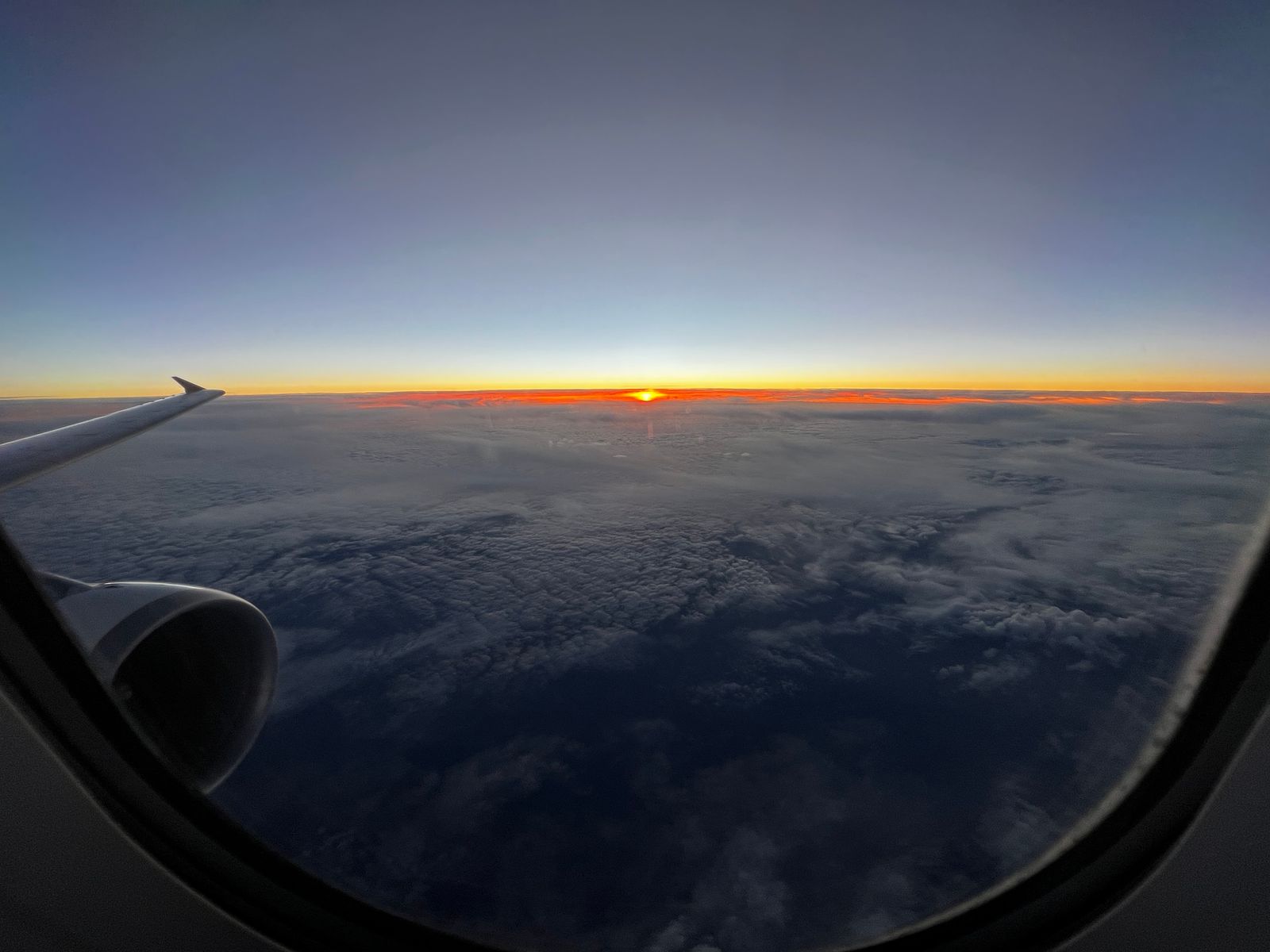 After many cancellations and with the latest crunch on Eurobonus award seats to the US this trip was close to not being possible at all. But as luck would have it Austrian had some availability in business class on one of their shorter long haul routes to Montreal. I had not heard much about this airline’s business class service so my expectations were not very high, but I was happy to find they were greatly surpassed!

The seat is similar to many other European airlines’, including SAS and Swiss, with the air mattress. It’s a slightly smaller version than the one SAS uses and as a result they’re able to squeeze in a 2-2-2/1-2-1 layout on the 777. However this flight is normally served by a 767 and it was in our case as well, meaning a 1-2-1 layout. For me a 2-2-2 layout in business class will always be a mark against the airline, since there are no good seats for a solo traveler (The single seats, so-called “throne seats” are not bookable in advance unless you have status with the LH Group), but on the 767 this is of course not an issue. 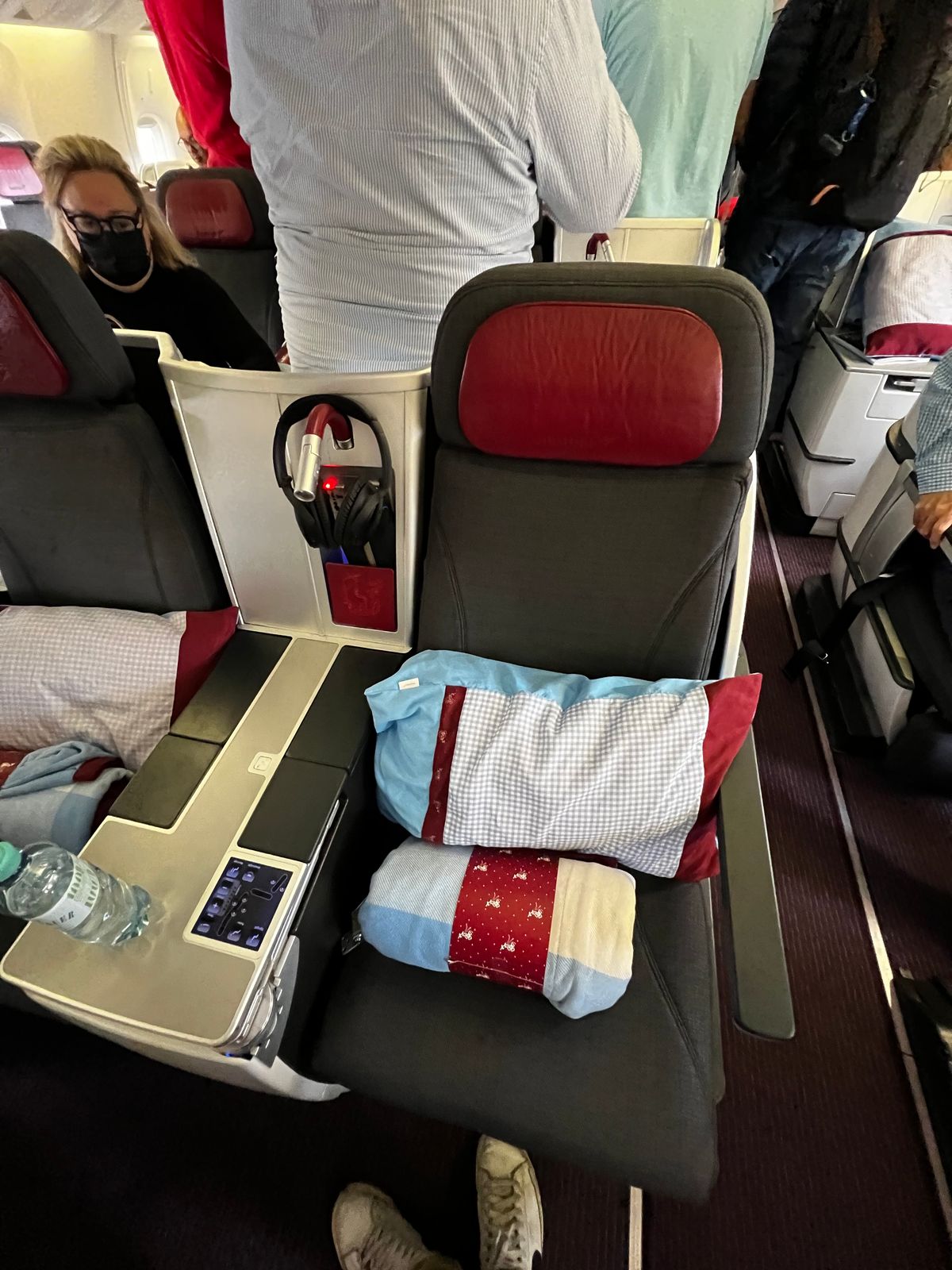 The seat itself is good, the air cushion means you can regulate the stiffness of the seat as well as changing the position of the lumbar support. The difference between the settings isn’t huge, but it’s a nice gimmick. The seat is also very comfortable and I had no issues sleeping in it. The seat is a bit narrower than the one used by SAS and Swiss, but for me that was not a problem. It comes with a lot of practical storage space, including a bottle holder next to the screen and the reading light was a perfect place to hang a pair of headphones.

The IFE system is good, just as with SAS it features a regular 3.5mm headphone jack which allows you to plug in your own headphones. This is always a plus for me as I carry a comfortable pair of Bose QC35 whenever I travel and airline headphones, even in business, are generally not very good. That being said Austrian offers the same Bose noise canceling headphones as Lufthansa does in First Class!

At 7 rows the cabin is small enough to feel quite intimate, but not so small that you feel cramped. The two toilets are located in the front galley, both of which very small, no bigger than a regular economy class toilet, so nothing special to see there.

The amenity kit was among the most dull and anonymous ones I’ve seen throughout my travels. It’s a small black bag with a few basic items, including a toothbrush, toothpaste, socks, eye mask, some skin cremes, and ear plugs. None of the products stood out as especially great nor as particularly Austrian, I know of several airlines which like to highlight products from famous brands from their home country, but this was not the case here.

If the amenity kit was a disappointment the food was quite the opposite! The three course menu was served on individual plates course by course (As opposed to some airlines that throw you a tray with all 3 meals on it at once) and was delicious. The main course I chose was a “Backhendl”, a deep fried chicken with fried potatoes, two things which are very hard to get right in the air, but somehow they managed to get both very crunchy and delicious, almost like they were freshly cooked. Very impressive!

The wine selection was also very good, with a good selection of mainly Austrian wines. I sampled most of them and they all held up to the standards one would expect for wines served in business class, especially surprising was the Austrian sparkling rosé which surpassed my expectations once again.

After dinner they treated us to the Vienna Café menu, which featured a whole host of coffee creations. I don’t normally drink coffee, and especially not in the air, but with an ice cream coffee on the menu I couldn’t resist. It was delicious, and I’m not even a coffee drinker!

The meal before landing also surpassed my expectations. A lot of airlines just offer a cold snack before landing, but Austrian offered a hot meal, which was a nice change of pace. Both the veal patty that I had and the sautéed shrimp that my fiancée had were very good.

Additionally the staff’s service was excellent, they were very friendly and attentive, glasses were not left empty for many seconds before asking if we wanted a refill and they were always happy to help with anything we needed. At one point between meal services my fiancée was hungry and asked if there was something she could eat. I was expecting them to bring some prepackaged snack or similar but instead they brought her a plate of fresh fruit! A very impressive service level that would be more at home in First Class.

The IFE is the same as in SAS apart from the screen being larger as well as the fact that it comes with a remote if you do not want to touch the screen. It’s a nice and responsive UI, the selection of movies is big and featured some fairly recent big titles. I watched one movie but apart from that mostly used it to show the moving map. The only thing I would improve with the map would be to allow me to see the map with data such as speed, altitude etc. overlaid instead of being forced to watch a slide show of different zoom levels and data.

With the air mattress seat it’s easy to sleep in these seats. As the flight was quite short there weren’t many hours available for sleep but I got a few hours in and slept well. The seat is comfortable and the air mattress is easy to adjust to your liking. The only thing I would improve is to have a bedding similar to SAS, instead they only offer a thin blanket which is not very warm.

Going in to this flight with no real expectations I can safely say Austrian hit it out of the park. The service was excellent, on par with any Asian airline I’ve flown or First Class flights, the food was delicious, and the seat was comfortable. I would definitely fly Austrian again, especially if they have availability on the route I’m flying. I would also recommend them to anyone looking for a good business class experience on a short to medium haul flight, as the hight service levels were kept up on our flight from Stockholm to Vienna as well.