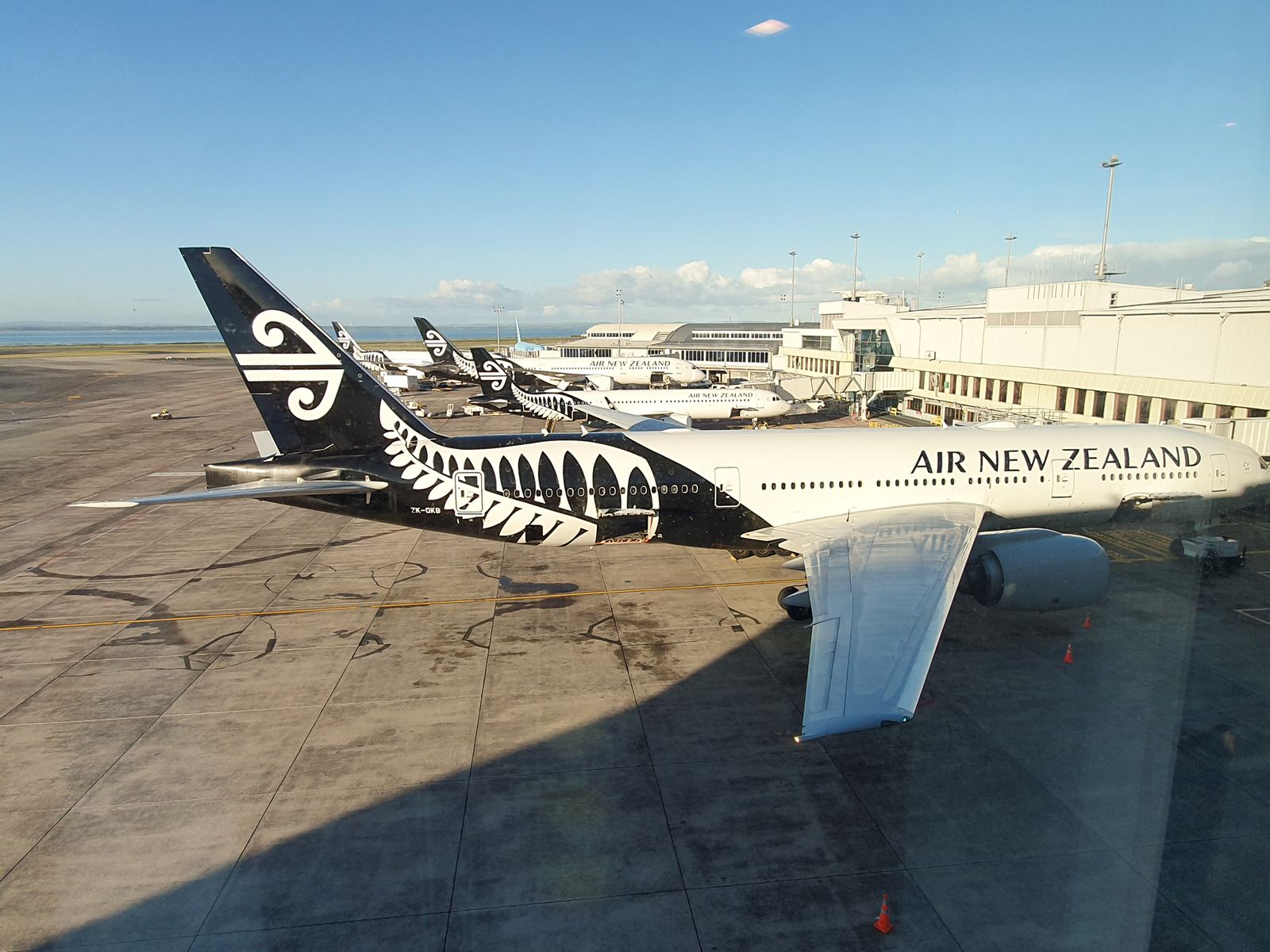 After flying economy to New Zealand I decided it was worth to spend some miles on a business class flight back to Europe. With some luck I managed to find a routing via Taipei and Paris. The first leg of the journey from Auckland to Taipei was an Air New Zealand flight in a 787-9 Dreamliner in Business Premier.

It was a morning flight so I arrived quite early at the airport. Check-in was smooth with a separate walled off area dedicated to Business (and even *A gold) passengers. The staff printed (all of) my boarding passes (and commented on my “long” journey).

From there I continued to passport control and security, which could have been a better experience. There was just one queue for Business travellers and it wasn’t particularly fast.

Once airside I headed to the Air New Zealand Business lounge. I quickly discovered that there were many Air New Zealand flights departing between 8am and 9am. The lounge was fairly large but was completely packed with barely a single vacant seat.

I did manage to find a seat eventually, but the lounge was very hectic. In particular boarding announcements were continuously blasted through the PA system which was extremely distracting. The lounge also has a barista coffee service and they were also continuously shouting out orders that were ready to be picked up.

In any case, after about 9 am the lounge quieted down drastically and finally felt like a lounge. Unfortunately I had to leave for my flight shortly after this.

Boarding was very smooth. I appreciated that the gate staff made the boarding procedure very clear, explaining that the sequence would be Business class first, followed my elite and gold status members, followed by general boarding. Once I had settled into my seat the cabin crew introduced themselves and personally welcomed me onboard, which was a nice touch.

This was my first time flying in 1-1-1 herringbone seating configuration. I’m not completely sold on this concept. First of all, there are no proper window seats since the seats face away from the windows. Personally I like to look out the window, especially during departure and approach so this layout is very awkward.

Also, the layout is definitely not designed for people travelling together. For me this wasn’t a problem since I was travelling alone, but I imagine it would be quite uncomfortable otherwise.

Furthermore, the layout is quite awkward since you are looking straight towards other passengers, and passengers further back look straight onto you. There is essentially no privacy when sitting up. However, in lie-flat mode the side walls do provide a decent amount of privacy.

There was also a fairly standard amenity kit waiting at my seat.

Despite the awkward window positioning I was able to get some nice photos as we departed Auckland.

The menu consisted of drinks, lunch, refreshments, and dinner. I was glad to see Champagne on the menu. While not the “fanciest” Champagne I still really enjoyed it. I was also quite surprised that there were two “proper” meal services. Usually on a 10-12 hour flight there is usually one larger meal service followed by a much simpler meal service prior to arrival.

The first meal service started with nuts and a after-departure beverage. Since it was still quite early I just ordered a cup of tea.

I ordered the rare seared beef for my appetizer, the braised taiwanese pork belly as my main, and apple crumble ice-cream as my dessert. Everything was very good and the crew was very attentive, passing through the cabin to offer more bread or drink refills.

After lunch I decided to explore the IFE system. I had some interesting features, including a “seat tour” and “seat chat” letting you chat with other passengers. While I didn’t test it myself (since I was travelling alone) it looked like some of my neighbors were using it.

There was also an IFE drink/snack menu (which I wish more airlines would offer), however this was only available for a very short time during the flight (I’m not quite sure why).

Following this I just lounged, worked, and watched some Netflix on my phone for the remainder of the flight until the second meal service started.

As we started to approach Taiwan, the second meal service started. I ordered the salmon appetizer, beef fillet main, and just some fresh fruit. Again everything was very good.

Some other quirks I noticed was that the lavatory had butterfly wallpaper (with an “easter egg”) and background music. A nice touch :)

Overall I was very happy with the flight. Unfortunately Air New Zealand currently doesn’t offer WiFi on their 787-9 fleet. The service and food was great. Despite the awkward herringbone seat layout, the seat was very comfortable for lounging.